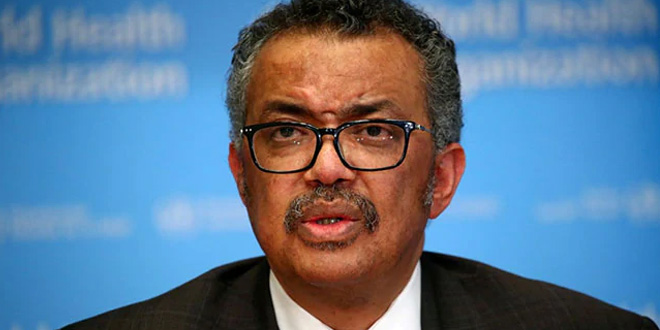 Globally, the conditions are ideal for more variants (of COVID-19) to emerge, said WHO Chief

New Delhi: “On average last week, 100 cases were reported every three seconds, and somebody lost their life to COVID-19 every 12 seconds”, said Dr Tedros Adhanom Ghebreyesus, Director-General, World Health Organisation (WHO) on Monday (January 24) at the 150th session of the Executive Board. It has been almost two years since the WHO Chief declared a public health emergency of international concern – the highest level of alarm under international law – over the spread of COVID-19 on January 30, 2020. At the time, there were fewer than 100 cases and no deaths reported outside China. Two years down the line, the world has reported over 35 crore cases of COVID-19 and lost over 56 lakh lives. The WHO Chief believes these numbers are an underestimate.

Since Omicron was first identified just nine weeks ago, more than 80 million (eight crore) cases have been reported to WHO – more than were reported in the whole of 2020. So far, the explosion in cases has not been matched by a surge in deaths, although deaths are increasing in all regions, especially in Africa, the region with the least access to vaccines, said Dr Ghebreyesus.

Talking about the future course of the pandemic, Dr Ghebreyesus said, we will be living with COVID for the foreseeable future and we will need to learn to manage it through a sustained and integrated system for acute respiratory diseases, which will provide a platform for preparedness for future pandemics.

The WHO Chief called it “dangerous” to assume that Omicron will be the last variant of COVID-19 or that we are in the endgame of the pandemic. On the contrary, he said,

Globally the conditions are ideal for more variants to emerge.

However, he also noted that if countries use all the strategies and tools provided by the WHO in a comprehensive way,

We can end the acute phase of the pandemic this year – we can end COVID-19 as a global health emergency, and we can do it this year.

1. Vaccinate 70 per cent of the population of every country, with a focus on the most at-risk groups;

2. Reduce mortality through strong clinical management, beginning with primary health care, and equitable access to diagnostics, oxygen and antivirals at the point of care;

3. Boost testing and sequencing rates globally to track the virus closely, and monitor the emergence of new variants;

4. Calibrate the use of public health and social measures when needed;

6. Learning critical lessons and defining new solutions now, not waiting until the pandemic is over.

85 per cent of the population of Africa is yet to receive a single dose of vaccine. We simply cannot end the emergency phase of the pandemic unless we bridge this gap. But we can bridge it, and we are making progress, said WHO Chief.