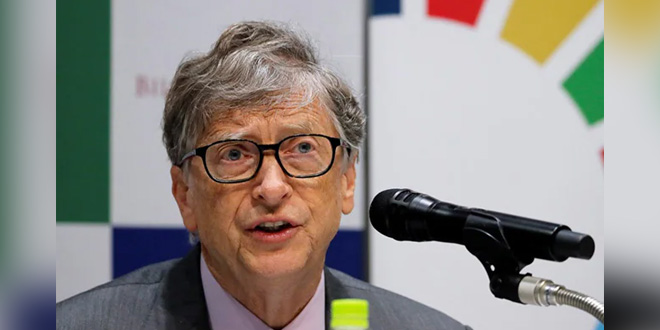 New Delhi: Microsoft co-founder Bill Gates has warned against the rising cases of Omicron, the coronavirus variant that was first detected in South Africa in November. According to the World Health Organisation (WHO), the Omicron variant is spreading faster than the Delta variant and is causing infections in people already vaccinated or who have recovered from the COVID-19 disease. With an aim to alert the people against complacent behaviour, Mr Gates said that the world could be entering the worst part of the pandemic as the new variant has the potential of resulting in the worst surge that humanity has seen so far. In a series of tweets, Mr Gates said that due to the Omicron spread, that also infected his close friends, he has cancelled most of his holiday plans.

In a series of tweets, Mr Gates urged his followers to take cognizance of the fact that the pandemic is still there. He emphasised the danger of the Omicron variant, particularly in relation to its reinfection rate, as well as the frighteningly little knowledge that the scientific community collectively possesses about the strain.

Just when it seemed like life would return to normal, we could be entering the worst part of the pandemic. Omicron will hit home for all of us. Close friends of mine now have it, and I’ve canceled most of my holiday plans.

Omicron is spreading faster than any virus in history. It will soon be in every country in the world. If there’s good news here, it is that omicron moves so quickly that once it becomes dominant in a country, the wave there should last less than 3 months. Those few months could be bad, but I still believe if we take the right steps, the pandemic can be over in 2022, tweeted Mr Gates.

In a subsequent tweet, he added that the intensity to which Omicron can make people sick is still unknown.

Even if it is only half as severe as delta, it will be the worst surge we have seen so far because it’s so infectious, he said.

He advised people to get their vaccinations done quickly to prevent them from getting seriously ill or dying and urged them to wear masks, avoid gatherings and keep all celebrations low intensity. He said,

I know it is frustrating to go into another holiday season with Covid looming over us. But it won’t be like this forever. Someday the pandemic will end, and the better we look after each other, the sooner that time will come.

In India, Omicron has crossed the 200 mark, with Delhi and Maharashtra reporting the most number of infections. This has the Delhi government to ban all gatherings, Christmas and New Year celebrations. Market trade associations have also been directed to deny entry to customers without masks. The fast-spreading Omicron strain has seen a rise in other states as well including Telangana, Karnataka, Rajasthan, Kerala and Gujarat.