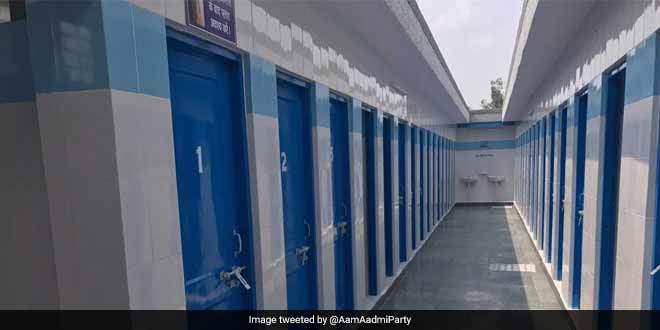 New Delhi: Sanitation and cleanliness remain worrying issues for Delhi and efforts are being made to better the national capital’s sanitation coverage. With an abundance of slums and unplanned colonies, and the municipal corporations’ unsuccessful performance in the Swachh Bharat Abhiyan till now, Delhi’s sanitation scenario is not becoming of a national capital. The city hopes to improve its track record with steps like the one on August 30, where Chief Minister Arvind Kejriwal inaugurated 1,206 community toilets across 36 locations.

The toilets were built by the Government of Delhi at JJ Basti in Punjabi Bagh, West Delhi. The toilet complexes inaugurated are large 60-seater ones, accommodating a large number of people at one go. This is the second time in 2017 that the Delhi government had successfully inaugurated community toilets in slum areas to counter the problem of open defecation. Earlier in January this year, the Chief Minister had inaugurated 1,000 community toilets at JJ Basti in Kalkaji, South Delhi and also inaugurated 810 public toilets more in June 2017. With the recent inauguration, public sanitation in Delhi has received a much needed breather, but much work needs to be done for the city to become completely open defecation free (ODF).

The sanitation conditions in Delhi, especially the slum areas have only worsened over the decades due to rise in population but absence of infrastructure. The Census 2011 estimate stated that 1.8 million of Delhi’s 22 million residents lived in slums. Nearly 65 per cent of Delhi’s slum population continued to defecate in the open till 2015, a concerning large number of people. The fact that under the first year of the Swachh Bharat Abhiyan, the combined tally of toilets built by the three divisions of MCD was zero. By 2015, the MCD’s contribution to the Swachh Bharat Abhiyan was 112 under construction toilets an 94 proposed ones.

In the subsequent two years, the sanitation scenario has improved mildly but not at a pace the government or the municipal corporations would have liked. The latest data from the Swachh Bharat Urban website shows that only 15 individual household toilets have been constructed in Delhi till now. The low number of IHHLs can be attributed to space constraints, a major problem in many of Delhi’s households due to which the focus has been strengthened towards building public toilets for larger number of people to use at once. The Delhi Urban Shelter Improvement Board (DUSIB) and the MCD are both responsible authorities for building public toilets.

The first year of Swachh Bharat Abhiyan saw no efforts from the MCD to improve the city’s sanitation scenario. In fact, the DUSIB, built more than 4,000 public toilets between 2015 to 2016 with its own funds. But the MCD did not complete a single construction in the first year of the Abhiyan, and the city had to pay a price for that for the next two years, said Sushmita Sengupta of Centre for Science and Environment. 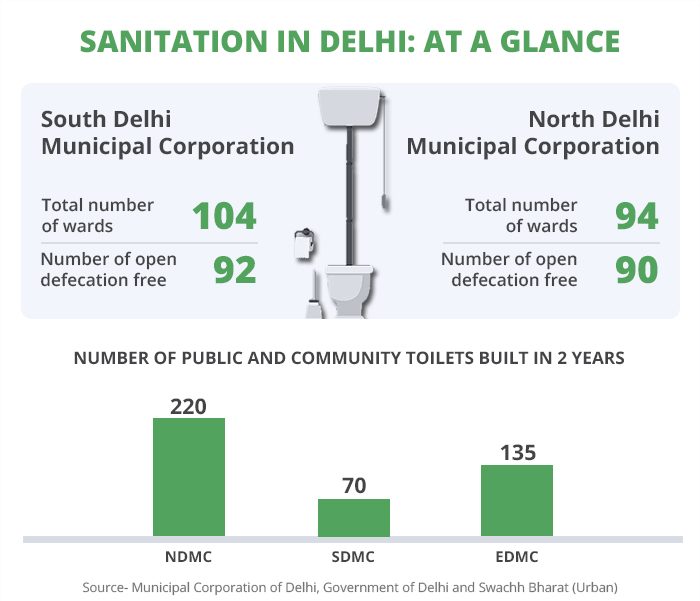 Though the first year saw a lag in the number of public and community toilets built by all the wings of MCD, the subsequent years have seen momentum. At SDMC, we have already built more than 200 such public toilets and by the end of December, plan to build 50 more to completely eradicate open defecation, said Puneet Goel, Commissioner, South Delhi Municipal Corporation.

The definition of the term open defecation free is yet to be wholly understood by municipal authorities across India. Mere construction of toilets does not make a town or city ODF as the practice of open defecation must entirely be eradicated for the ODF certificate to be granted. Delhi still faces significant challenges in terms of becoming entirely ODF. Open defecation is still a common practice across the city, especially across railway tracks in South and North Delhi. Further, two issues which continue to plague Delhi’s sanitation scenario are cleanliness of the toilets and low number of toilets for women. A March 2017 independent survey by an NGO called Action Aid surveyed 229 public toilets in Delhi and found 70 per cent to be unclean, without water supply, which included both DUSIB and MCD built toilets.

Whether Delhi goes ODF on time or not, whether its ranking in the next year’s Swachh Survekshan improves or not, the inauguration of public toilets is definitely an optimistic change, especially for slum dwellers who have struggled to have access to safe sanitation. But the real improvement will only be possible when the constructed toilets are properly functional with water, lights and other amenities and when there is adequate number of toilets for Delhi’s women population.