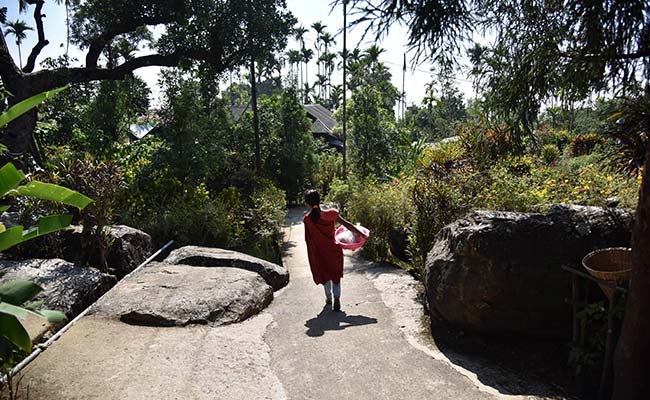 When Prime Minister Narendra Modi cited the example of Meghalaya’s Mawlynnong as India’s cleanest village last year, it didn’t come as a surprise. In 2003, a journalist from Discover Magazine visited this remote village in Meghalaya and was so impressed with what he saw that he dubbed it ‘Asia’s Cleanest Village’. Since then, the moniker has stuck and Mawlynnong continues to be one of India’s cleanest villages.

From having a dedicated and environmentally conscious village population to zero tolerance for littering, let’s explore how Mawlynnong has managed to sustain cleanliness.

Sanitation is considered a community responsibility, and the villagers of Mawlynnong participate in cleanliness chores from a very young age. Children storm the streets armed with brooms, sweeping up garbage before leaving for school. Hand-woven, cone-shaped baskets which are scattered throughout the town are emptied by the children. Daily cleaning for children and adults is a regular activity, while the village leader assigns out work to be completed for the village’s collective good. The village community has collectively banned smoking and plastic usage, thus ensuring basic environmental cleanliness.

The residents of Mawlynnong have come up with innovative ideas to manage waste. Biodegradable wastage such as leaves are buried and used as manure. Other wastage is driven far away from the village and burned. Materials such as plastic, which is toxic when burned, is reused in the form of planters and swings. The village has also eradicated open defecation with the presence of toilets in each of its households.

Mawlynnong boasts of houses with clean and green surroundings. Natural basins for rainwater harvesting in front yards give the houses a unique look. Add to them the bougainvillea and orchid draped patios, and impeccably maintained gardens. The surroundings ensure that the environmental sanctity of the village is maintained.

But fame often brings downsides with it and Mawlynnong is no exception. In recent times, villagers have complained of increased noise pollution and lack of privacy because of the large number of tourists who visit the village. However, Mawlynnong remains Asia’s cleanest village till date. The village has become an inspiration for other villages such as Assam’s Shikdamakha. which is looking to eclipse Mawlynnong as Asia’s cleanest village by engaging its inhabitants in similar acts of community cleaning and environmental consciousness.

Also Read: Focus On Recycling Plastic Rather Than Banning It: Experts

#MyCleanIndia: These Celebrities Are Spreading The Swachh Message

A Letter From ‘India’ To You – Please Don’t Litter!