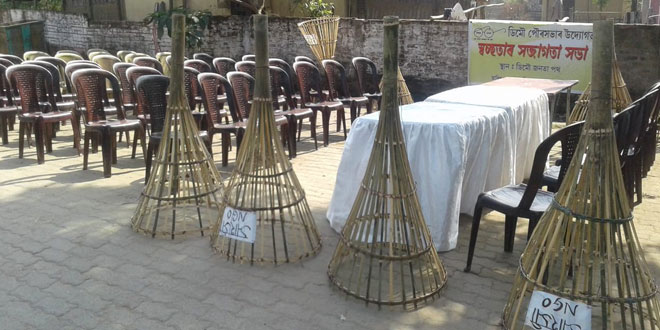 New Delhi: If the idea is to reduce plastic waste then why not start with where waste gets dumped? Assam takes a step towards replacing plastic dustbins with a better and environment-friendly alternative, bamboo bins. Taking the beat plastic pollution initiative further the civic body has also asked sanitation workers to place the cotton cloth in the dustbins and strictly avoid using plastic polythenes that are used to prevent garbage from seeping through. Talking about this new initiative, a senior official from Guwahati Municipal Corporation said,

One of the main goals of Swachh Bharat Abhiyan is waste management. Keeping that in mind Assam has decided to give up on the practice of using plastic dustbins and instead switch to a more eco-friendly alternative and that is why we have decided to install bamboo bins. Plastic is a non-biodegradable thing, it ends up staying on the planet for some thousands of years and if we continue to use plastic like this then our planet will drown under the plastic waste mess.

Highlighting the importance of this move, the officer added,

With this one practice, we want to motivate people about ‘reuse, recycle’, two of waste management’s most important terms and make them understand why they also should switch to eco-friendly alternatives to plastic.

Assam has taken a step forward in reusing and recycling. Dustbins made of bamboo have been put up all across the state in contribution to the #SwachhBharat Mission.#MyCleanIndia pic.twitter.com/nOUuwPclnd

This is not the first time, Assam has taken a lead in plastic waste management, last year, the state decided to construct roads using plastic waste, thereby reducing the load from its landfills. The first-of-its-kind project for the state was launched on the Kahilipara-Dakhingaon Don Bosco Road.

According to the Beat Plastic Pollution study that was released last year on World Environment Day, Assam generates 2.99 lakh kilogram of plastic waste every day. Of this volume, 37,000kg of waste is generated every day in Guwahati alone. To change this grim reality of plastic waste generation, the state has been aggressively taking steps.

Also Read: Guwahati To Tackle Plastic Waste By Making Roads From It