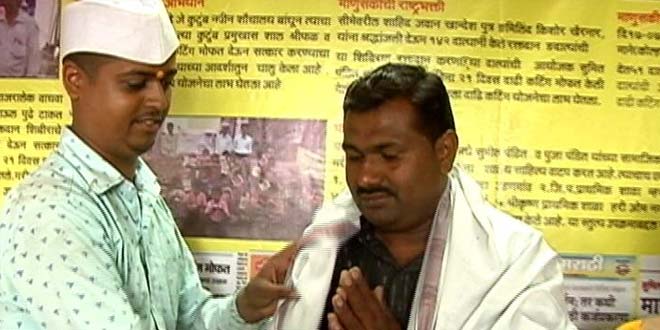 New Delhi: 23-year-old Sumit Pandit is not a usual barber. Apart from being adept with scissors and razors, Mr Pandit has been sensitising and spreading awareness amongst the people of Aurangabad on various important issues such as construction of toilets, blood donation and saving the girl child. Sumit has a special offer for those who opt for safe sanitation, and construct toilets in their households. He offers free haircuts and beard trimming for a period of 1 month 21 days for such people, and finds immense joy in spreading awareness while helping others.

Mr Pandit’s mission started with Beti Bachao in 2016 to protest against female foeticide, during which he encouraged people to have a girl child, and gradually moved on to sensitise them on sanitation and toilet construction.

“I was amused to see how people could spend anywhere between Rs 17,000 to Rs 40,000 on a smartphone, but still defecate in the open. So I tried convincing them and explaining about the importance of toilets and how safe sanitation is connected to health and dignity”, Mr Pandit said.

So far, Mr Pandit has influenced 78 people to construct toilets in their homes. Samadhan Koli who was a regular client in Sumit’s salon and now is a proud owner of a toilet.

“One afternoon as I was getting a haircut, Sumit mentioned about how important it is to have toilets in our homes, especially for the women of the family,” said Mr Koli.

Samadhan Koli was not only inspired to construct a toilet. He has taken a step forward and started inspiring people to construct toilets at their homes.

Mr Pandit considers former President Dr APJ Abdul Kalam as his mentor and believes in his principles of working for the betterment of people.

“I have read Dr Kalam’s book and try to imbibe it in my life and working for the society gives me immense joy,” says Mr Pandit

Sumit knows that free haircuts and beard trimming are good ways to motivate people. “For me, I am providing free service to them, but I think I can spread awareness and motivate them to an extent,” he added.

A frequent blood donor who donates every three months, Sumit has donated blood 11 times, and also organises blood donation camps in his barber shop. Free distribution of medicines, haircuts for the destitute, food for families in hospitals, and encouraging people to build toilets in their households for a healthy and disease free life, Sumit Pandit and his family have found immense joy in serving others and building awareness towards leading a better life.

Also Read: How Clean Water, Sanitation and Awareness About Hygiene Can Save Lives Of Children In India