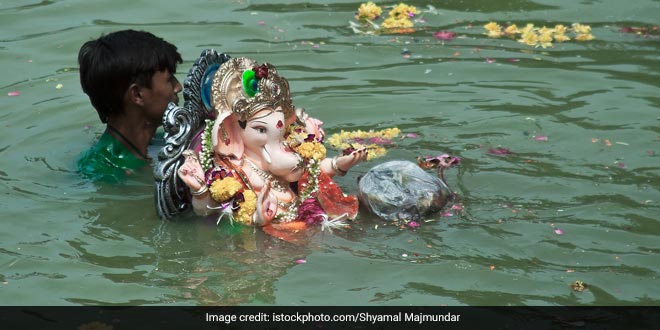 Two ponds have already been installed in the Jubilee hills circle, one in NBT Nagar and two in Sheikpet Maruti Nagar

Hyderabad: The Greater Hyderabad Municipal Corporation (GHMC) has set up artificial baby ponds for immersion of Ganesha idols, made of Plaster of Paris, for making the whole event simple and feasible. Abdul Khayum, the Nodal officer of the baby ponds, GHMC told ANI that two ponds have been installed in the Jubilee hills circle, one in NBT Nagar and two in Sheikpet Maruti Nagar.

We have made three shifts. We also carried out a door-to-door awareness program to install the clay Ganesh idols and we got a good response. There is also a problem going to Tank bund, which is very far, so we have made ponds in the nearby areas, the nodal officer said.

After the immersion Pooja Samagri, it will be removed separately and then dumped in a van. Nearly 65 to 75 idols are being immersed in a shift for now. We have deputed the Sanitation staff to clean the pond. The idols will be shifted to different places after immersion. The devotees are very happy and are thankful for having baby ponds in nearby areas,” the nodal officer added.

Chandrashekhar Reddy, the inspector of Golconda Police station said that there are around 115 Ganesh idols in the area and are divided into 6 sectors

The whole area has been divided into six sectors, consisting of sub-inspector and subordinate team. The devotees have been asked to immerse the idols in the baby ponds, and only the idols below 5 feet are allowed. An excavation pond has been set for the purpose. There will be a police team with the devotees near the pandal to escort them to the ponds. Devotees are appealed to not bring children in the procession as there is a chance of being misplaced. Idols between 5-10 feet are to be immersed in the Neknampur baby pond and Malkam Cheruvu baby pond, both come under Cyderabad Commissionerate. And, the idols above 10 feet are to be immersed in the Jiaguda immersion point. The public is advised to go there, Mr. Reddy added.

The devotees participating in the event seemed very satisfied with the idea and said that this idea should have been brought up a long time back.

The baby ponds should have been made a long back itself. This year they have made them and it is very feasible for us. Earlier, it was very difficult to go long distances with kids, but now the small idols can be put easily, a devotee named Sravanthi said.