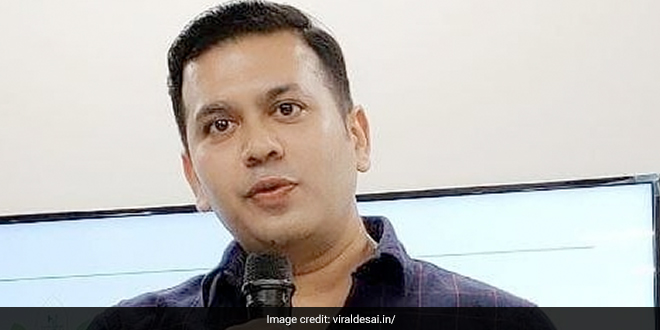 Surat: Well-known environmentalist and industrialist Viral Desai has been celebrating Ganesh Mahotsav named – Tree Ganesha – for the last several years. During this Mahotsav, devotion to Lord Ganesh along with conservation of the environment occupy centre stage. This year Viral Desai aims to reach Amrutkal with the theme of Satyagraha against pollution and climate change and has organized Tree Ganesha. Forest department of Gujarat and Gujarat Pollution Control Board, Surat are officially associated in the Tree Ganesha.

Talking about the mission, Desai said,

The main purpose of taking up the challenge of Amrutkal, mission 2047 is to provide a gift of the clean, green and pollution free environment to future generation when the country celebrates 100 years of independence. The way we have got the gift of flourishing and powerful India on the occasion of completing 75 years of independence due to hard work of our past generation, we must also ensure pollution free, clean and green India for future. We all must be equipped and aware of this, we have kept the theme of – Satyagraha against pollution and climate change

It must be noted that thousands of students from different schools and colleges have already visited Tree Ganesha, along with devotion to Lord Ganesh, the students are also taking the pledge of protecting the environment by becoming ‘ Paryavaran Senani’s.

Thousands of saplings are being distributed for plantation, and for the entire year, interactions and programs will be planned in all schools and colleges of south gujarat, a concept transformation of awareness, attitude and action campaign under the theme of Satyagrah against pollution and climate change will be going on. Large number of urban Miyawaki forests will be developed under this campaign.

Delhi Government Extends Complete Ban On Sale, Use Of Firecrackers Till January 1