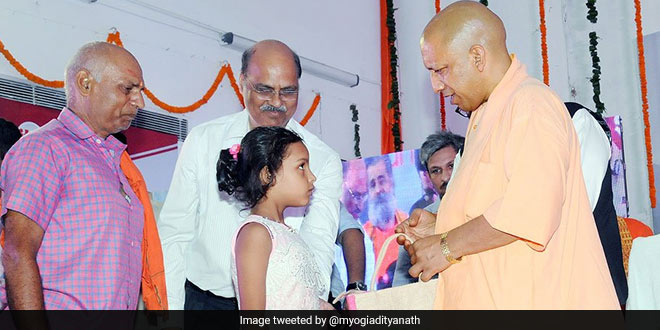 New Delhi: Uttar Pradesh Chief Minister Yogi Adityanath reiterated the state government’s commitment to make Uttar Pradesh open defecation free (ODF) by October 2, 2018. UP, which has consistently underperformed in toilet construction and Swachh Bharat Abhiyan related activities from 2014 to 2017, had turned around its construction rate dramatically in 2017-18. The construction of nearly 54 lakh toilets last year and 34 lakh toilets till July 2018 has increased the state’s confidence that it will successfully meet its deadline of going ODF by October 2, 2018. That would mean constructing 39 lakh toilets in three months at the rate of 44,000 toilets a day.

Putting the onus on the district magistrates to ensure that the ODF deadline is met, the Chief Minister said that adequate funds for toilet construction have been released to districts, and construction must be speeded up by the respective district authorities to ensure that the deadline is met. The Chief Minister was speaking at the Deen Dayal Upadhyaya Gorakhpur University on June 30, where a health checkup camp was organised for encephalitis patients.  CM Adityanath spoke at length on the importance of Swachhata, and how clean surroundings and clean water can prevent the disease in 90 per cent of the cases. The Chief Minister urged village elders to keep a lookout for symptoms of encephalitis and spread awareness about the disease among people.

The target is difficult to achieve but since last year, we have stepped up our efforts to build toilets. The Chief Minister has held multiple meetings with us on the Swachh Bharat Abhiyan, and districts’ progresses are monitored regularly. Supply of raw materials and trained masons from other districts has been much faster, and our district has seen construction of 7,000 to 8,000 toilets per day, said Akhilesh Mishra, District  Magistrate, Pilibhit.

Pilibhit’s sanitation coverage increased up to 83 per cent from 71 per cent last year. Mr Mishra said the maintenance of cleanliness was an issue discussed in all monthly meetings with fellow district magistrates and all districts are undertaking monitoring activities to ensure that the toilets are built and used.

Sushmita Sengupta, sanitation expert at the Centre for Science and Environment said that building over 40,000 toilets daily was an arduous task, and questioned how usable or durable these toilets would be.

“Even if we do assume that more than 40,000 toilets are being built daily on an average, the government must ensure that these toilets are as per the Swachh Bharat Abhiyan’s guidelines, usable and durable. In certain districts like Sitapur, Hardoi and Unnao, sanitation coverage is still near the 65 per cent mark. How will they achieve ODF status in three months? The government need not prepone the deadline, and instead should focus on building proper toilets till October 2019,” said Ms Sengupta.

CM Adityanath also asked people to become a part of the Swachh Bharat Abhiyan. He said that Prime Minister Narendra Modi has requested people to maintain cleanliness and refrain from disposing of garbage anywhere except for the designated spots.

“A sanitation campaign is running throughout the country, under the guidance of Prime Minister Narendra Modi. Do not dispose of plastic or garbage in drains, as these clog the flow of the drains and result in accumulation of water. I would request people to refrain from using plastics,” said Chief Minister Yogi Adityanath. The Chief Minister asked district magistrates to monitor the waste management status and ensure that there was no improper disposal of waste in any of the districts.

In order to ensure better health, cleanliness needed to be adopted on a larger scale. A parallel Swachhata programme was also being run across the state’s villages and districts, to spread awareness among people on the importance of cleanliness. The CM said that people are being told not to defecate in the open, not to throw garbage openly, segregate waste and maintain cleanliness all around. These practices will ensure a clean state, and also help lessen the cases of diseases borne out of unclean surroundings. At the end of the programme, the Chief Minister handed over Swachhata kits to children.

Toilet: Ek Real Katha: In Haryana’s Godikan Village, Girls Not To Marry Into Households Without Toilets

Maharashtra Plastic Ban: Plastic Packaging Of E-Commerce Products To Be Included In The Ban