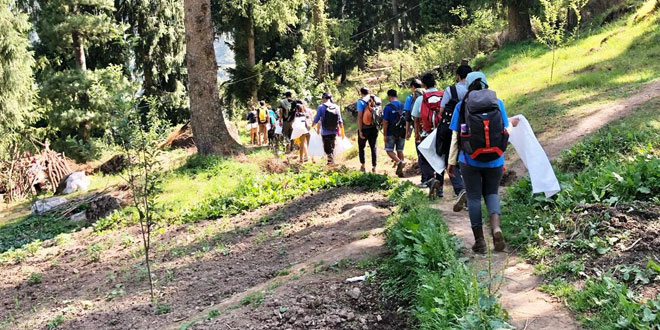 New Delhi: “Plastic bags, plastic water bottles, plastic plates, cups, chocolate wrappers, juice boxes, chips packages, and beer bottles – It was a huge pile of every waste possible! Did I trek 13 kilometres for this?” thought Vasudha Tyagi, 33-year-old New Delhi-based Banker and an expert trekker, standing on a mount of Kheerganga – one of the most popular trek destinations of Himachal Pradesh (HP) and aghast by the piles of trash making the place and the scenery horrible, quite contrary to the tranquility she was hoping for. The situation faced by Vasudha has become a regular sight in recent years with the increase in the number of trekkers and tourists at the site said Anil Kumar Sharma, Forest Conservator, Department of Forest, Himachal Pradesh. On average, according to the forest department, more than 50,000 people visit the site every year with about 800 people visiting almost every day during the peak season in the months of April-June and September-October. Thus, the department has recently decided to intensify measures to combat the waste crisis at Kheerganga like keeping a track of the things carried by each trekker and charging Rs. 50 per person to manage the waste generated by them.

Check Posts To Monitor The Trash Coming Along With The Trekkers

Talking to NDTV about the anti-littering measures to manage the waste problem at Kheerganga, Mr. Sharma said,

Last year, because of the rising garbage on the trek route, the forest and the river in Kheerganga, Himachal Pradesh High court ordered to close all illegal campsites in the area. But, since the trekkers have been still coming in large numbers, the ban was lifted and the Forest department thought of monitoring the camps sites and trek routes in a more systematic manner to maintain cleanliness.

Mr. Sharma further informed that the department has recently installed a check post at the starting point of the trek which lies at the end of Kalga village from where the human habitation stops and the 11 km trek to the Kheerganga hot-water springs starts. The officials deployed by the department of the forest at the check post have been given the responsibility of keeping a register of the name, contact and other details of each trekker and their luggage including the single-use plastic waste items such as plastic water bottles, cutlery, and packets of eatables. The trekkers will be asked to deposit all single-use plastic items at the check post which they can retrieve on their way back from the trek.

Apart from this, each trekker will be charged an entry fee of Rs. 50 at the check post. The amount collected will be used for the maintenance of the trek route which includes conducting regular cleaning drives in collaboration with NGOs (Non-Government Organisations) like Healing Himalayas.

The department has also decided to involve the local people in its efforts to clean the Kheerganga. The local people will be recruited to keep a check on littering by trekkers and shopkeepers on the trek route. The deployed personnel will be directing the visitors towards garbage bins and will help them dispose off waste to cut littering. The waste collected from the trek route will be brought down to the Kalga village where it will be sent for recycling.

We are also talking with the State Tourism Department to help us with funds for building toilets for trekkers at the campsites. Apart from this, we are also putting up signages and paintings to display messages related to cleanliness

Through these efforts, Mr. Sharma said that the forest department aims to educate people about saving the Himalayas from getting deteriorated due to erratic human behaviour and at the same time inspire them to shun the habit of littering and be mindful of their waste.