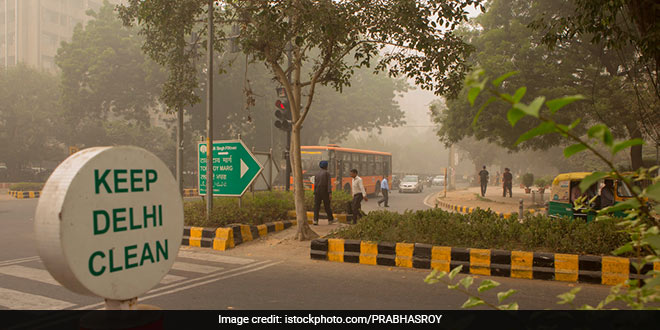 New Delhi: Delhi’s air quality deteriorated to ‘severe’ due to a dust storm in northwest India which led to a sudden spike in the pollution level in the national capital, the Centre-run SAFAR said. The System of Air Quality and Weather Forecasting and Research (SAFAR) recorded the city’s air quality index (AQI) at 408 which falls in severe category, while the Central Pollution Control Board showed the AQI in very poor category at 347.

SAFAR also gave a list of precautions that people should take under the ‘severe’ air quality condition, which includes avoiding all physical activity outdoors. The SAFAR said,

Give a miss to walk today. Stop any activity level if you experience any unusual coughing, chest discomfort, wheezing, breathing difficulty or fatigue and consult doctor. If the room has windows, close them. If the air conditioner provides a fresh air intake option, close it.

Avoid burning anything, such as wood, candles or even incense. Keep the room clean – don’t vacuum. Do wet mopping frequently. Masks known as N-95 or P-100 respirators may only help if you go out. Do not rely on dust masks for protection.

SAFAR said the whole of northwest Indian region is under the grip of blowing dust and the AQI is predicted to remain in severe to upper side of very poor range on Thursday and Friday. The SAFAR said in its daily forecast,

Further deterioration of air quality is expected for today despite high ventilation with lead pollutant changing from PM 2.5 to PM 10. In Delhi, air quality is predicted to touch higher end of the very poor category. After May 10, Delhi air quality will improve due to expected western disturbance and gusty thunder storm but occasional episodes of sudden peaking of dust on isolated places in northwest India, including Delhi, will be seen.

The level of PM2.5 (particles in the air with a diameter of less than 2.5 micrometres) was recorded at 125 and the PM10 level 439. The CPCB convened an emergency meeting of its task force in view of the sudden rise observed in particulate matter concentration in Delhi-NCR. IMD representative informed the meeting that the present air quality levels may be attributed to shifting of dust from neighbouring states. The minutes of the meeting said,

It is likely that strong surface winds will prevail in Delhi-NCR up to Friday which will result in re-suspension of dust. Inputs were also available from IITM that fresh plume of dust emitted from western Rajasthan and northern Gujarat are expected to reach Delhi by today afternoon.

The task force reviewed the situation and concluded that primarily dust from outside and localised sources is contributing to rise in pollution levels in Delhi-NCR. The task force advised people to minimise the exposure.