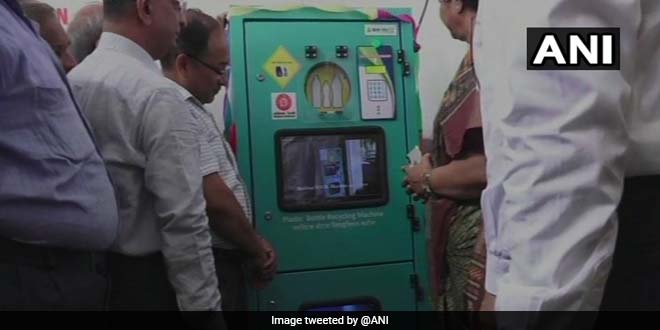 New Delhi: Want to protect the environment  from the menace of plastic pollution and make a bit of money at the same time? We have news for you. Indian Railways has now launched a novel initiative that rewards people with monetary incentives for helping the department recycle single-use plastic bottles at railway stations. As part of this initiative, passengers will get a cashback of Rs 5 in their Paytm wallet for dropping a plastic bottle into the crushing machine, which has been installed at the Vadodara Railway Station, the ninth busiest railway station in India in terms of frequency of trains. Through this initiative, which is part of the Indian Railways’ efforts to beat plastic pollution (theme for this year’s World Environment Day), the railways department hopes that bottles which would otherwise end up strewn across railway platforms, will get recycled.

Railways have installed bottle crushers at the Vadodara railway station to minimise plastic waste at the station.Railways have announced that passengers who'll enter their mobile number on the machine after dropping a bottle into it will get cashback of Rs 5 on their Paytm wallet pic.twitter.com/F5vlY9Wwfm

How does this work?

It is quite simple to operate. People will have to insert the Polyethylene terephthalate (PET) bottle into the chute (a sloping channel or slide for conveying things to a lower level), where the bottle is analysed if it’s plastic or of other material and then crushed by the machine. After dropping a bottle for recycling, people then have to enter their phone number to redeem the cashback of Rs 5, which will reflect in the Paytm account associated to the mobile number. A single machine has the capacity to hold and process hundreds of bottles per day, and this facility can be availed unlimited times, with every plastic bottle dropped in to the recycling machine.

The move comes in the backdrop of the World Environment Day that was celebrated on June 5 and hosted by India. The theme for this year was reducing the menace of plastic waste. Each machine is about the size of a refrigerator and can “consume” around 5,000 plastic bottles daily.

We noticed that people would often casually throw plastic water bottles on train tracks. Though, there are dustbins available at the railway station but people would throw discarded bottles in dustbins out of the habit of casually throwing a plastic bottle anywhere. We thought that if something could be given to them in return for recycling plastic bottles, the habit might change,” said one of the officials of the Western Railways.

“We are getting positive response, and the railway department is now looking forward to install more such machines to protect the environment from the hazards of plastic pollution,” the official added.

However, this is not the only green initiative taken by the Indian Railways on the eve of World Environment Day. Earlier, the Indian Railways’ catering arm, Indian Railway Catering and Tourism Corporation (IRCTC) took a significant step by introducing bio-degradable cutlery made from sugarcane in eight select Shatabdi and Rajdhani trains originating from New Delhi.

A Small Step to Beat Plastic Pollution: On #WorldEnvironmentDay, Indian Railways has started using fully biodegradable packages in 4 Shatabadi and 4 Rajadhani trains from Delhi, contributing towards a greener planet. pic.twitter.com/ILcwHN1wgK

The eco-friendly cutlery is made from bagasse, the fibrous remains left behind after extracting sugarcane juice. Products made from bagasse require a month to two to compost and during that degradation process; they provide natural ingredients back to the environment.

Plastic Is Choking Our Oceans, Animals And Planet, Says Actor Sonam Kapoor With An Appeal To Beat Plastic Pollution