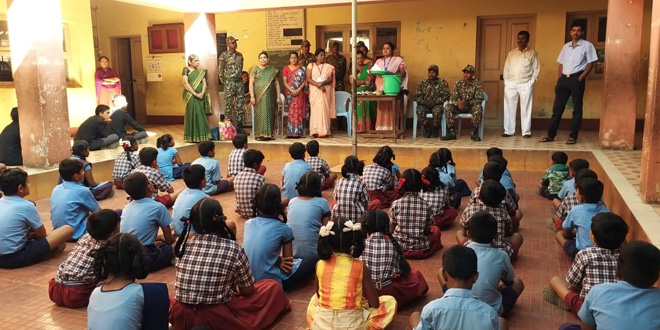 New Delhi: For long, waste management has been an albatross around Bruhat Bengaluru Mahanagara Palike (BBMP), the city’s civic body’s neck. From beautifying black spots that is public spaces boasting tonnes of unattended waste, running awareness campaign on social media, to deploying marshalls to keep a vigil and ensure waste is not dumped at vulnerable points, BBMP has tried everything but the city’s waste woes don’t seem to end. Committed to addressing waste management and promoting waste segregation at source, BBMP has now turned to students of government schools across the city.

As part of its latest initiative, BBMP Marshalls are educating children about waste management and waste segregation and how through this they can help protect the environment. Explaining the project, Colonel Rajbir Singh (retired), BBMP’s Chief Marshall Officer, said,

Last year in September, BBMP started the Marshalls project with an aim to stop littering of waste and cleaning of black spots. We Marshalls work at wee hours when people usually come and secretly dump their household waste. While catching offenders and schooling them we realised that people don’t know what to do with their waste and how to discard it. That is when we decided to teach waste segregation to children who can then take home the message.

As part of the project which was started earlier in January, BBMP Marshalls identify schools and then conduct a session wherein children are taught about the cycle of waste, how waste is a resource, composting wet waste at home, how by segregating waste at home they can reduce the burden on landfills, how waste pickers earn a livelihood through waste, so on and so forth. The session also involves hands-on training where students are given a small bag of mixed waste and asked to segregate waste.

In the last one and a half month, BBMP Marshalls have covered at least 10 schools reaching out to around 4000 children from class 4 to class 9. The plan is to cover all government schools in the city.

It is tough to conclude whether the project will yield big results or not, but it has surely initiated a conversation among children, parents and teachers. Talking about the same, Thammegowda, Principal of Government Model Primary School, said,

Last week BBMP Marshalls conducted a workshop on waste management in our school. Along with the students, teachers and some of the parents also participated and each one of us learned something new. I believe it’s a great learning programme and has awakened the students.

NDTV received similar feedback from two of the students – Chandana studying in class 8 and Pavan Kumar from class 7. Sharing her learning, Chandana said,

I learned how to segregate waste, make manure from waste and hen use it for growing plants. BBMP Marshalls talked to my parents as well.

While talking to NDTV, explaining the reason behind routing the idea of waste management through children, Randeep D, Special Commissioner, Solid Waste Management at BBMP said,

Behavioural change is the biggest challenge we are facing when it comes to waste segregation. When we look at a large section of people, there are all kinds – one who wants to follow the rules but don’t know how it is done; some people know how to segregate waste but are not willing to shift; for some it could be plain laziness and insensitivity. In a bid to address to all kinds of people at once, we decided to target children – our next generation who can take forward the idea of waste management.

By targeting school children, the younger generation and impressionable minds, BBMP is trying to achieve twin objective. First, teaching waste segregation and its importance to them so that they start practiSing it from an early stage itself.

Habits inculcated in the early years of life stay long with us. It is easy to mold and shape a child than an adult, said Randeep D.

Second, BBMP believes that whatever children learn in school, they go back home and talk to their parents about it. After learning about waste management, they will be in a position to question their parents and make them practiSe waste segregation.

We believe that once there is pressure from the child there more chances that parents will change and start segregating waste, said Randeep D.

BBMP is not the first one to talk about waste management with children. In the past, Hasiru Dala, a social impact organisation in Bengaluru had conducted educational sessions in various gram panchayats and government schools in the city. Talking about the impact of this approach, Nalini Shekhar, co-founder of Hasiru Dala, said,

Any amount of awareness is less and children are indeed very good messengers, but we need to focus on the methodology – the way we are educating children and sending across our message – which is as important as the awareness itself.

Erstwhile garden city generates 4000 metric tonnes (MT) of waste everyday but only 1200 MT is processed and the remaining 2800 MT, which is mixed waste, is dumped in the landfill. According to BBMP, there are two major reasons behind poor management of waste in the city – the waste collection system not catering to 100 per cent of the waste generators through door to door collection; waste generators not segregating waste at source.

At the moment, BBMP is trying out different options to tackle these two issues with waste management in the city. The impact and effectiveness of these measures may be more visible in times to come.

Also Read: By Helping Offices, Events To Go Zero Waste, This 34-Year-Old From Mumbai Is Reducing Garbage Load On Landfills