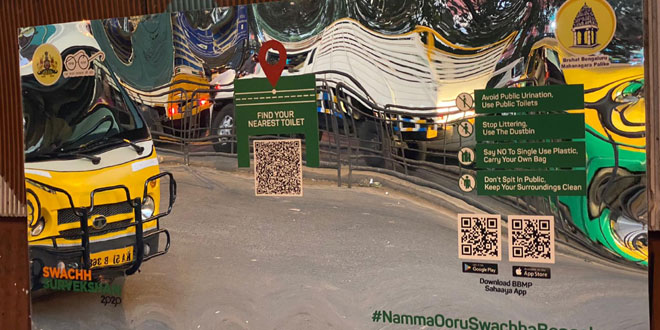 New Delhi: Mirror, mirror on the wall, how to stop open urination once and for all? Bengaluru, like many places in India, grappled with the problem of open urination, even after 418 public and community toilets and 169 e-toilets were constructed under Swachh Bharat Abhiyan and the city attaining the open defecation free (ODF) status in September 2019. As the problem of open urination persisted, many ideas to prevent it were considered. Will putting up pictures of deities in public spots prone to open urination help? Or will writing slogans on the walls discourage people from considering public spaces as open urinals? From imposing a minimal fine of Rs. 100 on open urination to the beautification of common open urination spots, Bruhat Bengaluru Mahanagara Palike (BBMP), the civic body of Bengaluru, had tried every possible trick in their book to eliminate the practice of open urination, but all efforts went in vain. Now, BBMP has come up with one of a kind ‘shame’ campaign to stop people from urinating in open.

As part of its latest initiative, BBMP has held up a mirror to those converting public spaces into urinals. The municipal corporation has placed eight feet by four feet mirror at five prominent locations in the city, namely – K.R. Market, outside ESI Hospital in Indiranagar, near Jyoti Nivas College in Koramangala, on Queens Road, and on Church Street.

Our idea and the motive behind this creative campaign is just to create awareness about open urination and make people use the nearest public toilet, community toilet and electronic toilet or e-toilet (self-contained, self-cleaning, automated and remotely monitored toilet pods). We are an ODF city and have 418 public and community toilets and 169 e-toilets, but despite this people prefer to urinate in open and such instances put a blot on the city’s sanitation status.

Though the city was certified ODF in September 2019, some street walls continue to remain a common urination spot for the dozens of citizens.

The locations, where we have put up mirrors, are prime spots and considered common urinating walls, said Abhijith Shyandilyan from CHLEAR, creative agency deployed for the execution of the campaign.

Explaining how mirrors will stop people from urinating in open and force them to opt for public urinals, Abhijith said,

The mirrors have a QR code affixed on them which on scanning lands up on the google toilet locator where one can find the nearest public toilet established by BBMP.

Along with this, there are two more QR codes for the user to access BBMP Sahaaya, a mobile application to complain about poor maintenance of public and community toilets. The mirrors also carry a couple of awareness messages focused at maintaining cleanliness in the city – ‘avoid public urination, use public toilets’, ‘stop littering, use the dustbin’, ‘say no to single-use plastic, carry your own bag’, and ‘don’t spit in public, keep your surroundings clean’.

Further talking about the selection of the five locations to put up the mirror, Special Commissioner Randeep D said,

We opted for higher footfall areas so that more and more people are educated and they get to know about public toilets. Also, open urination was rampant in the identified locations.

Glass mirrors are fragile in nature and don’t have the strength to withstand bangs, collisions and crashes. This could have been a cause of concern for riders and that’s why BBMP has used acrylic mirrors. Talking about whether mirrors can be a distraction to bikers, Randeep D said,

The mirrors have been up and running for the last four days and as of now, we haven’t received any complaints with regard to mirrors being a problem for anyone. Also, it’s just an awareness campaign and we don’t intend to continue with it forever.

While BBMP believes that mirrors can be utilised in some or the other way, Nalini Shekhar, co-founder of Hasiru Dala, a social impact organisation working in Bengaluru says,

Embarrassing people is not the answer. BBMP needs to increase public toilets and maintain them well.

Since, the initiative is also a part of Swachh Survekshan 2020, the fifth edition of the annual urban cleanliness survey, which is underway; the mirrors will be up till January 31 (last day of Swachh Survekshan). After the conclusion of cleanliness survey, BBMP will review the impact of the campaign and decide on whether to continue with it or not.