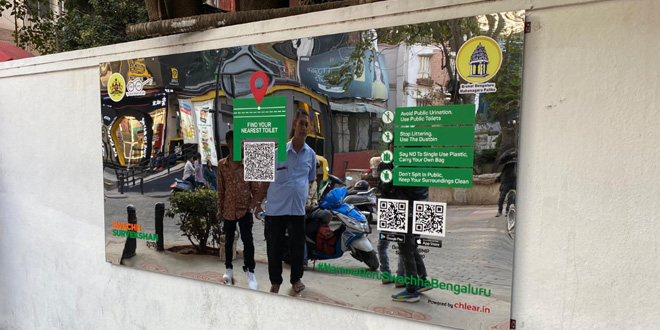 New Delhi: Karnataka’s capital Bengaluru has been grappling to control the problem of open urination for quite some time now, but without much success. The problem persists to such an extent that certain common open urination spots are identified by their urinating walls. To put a full stop to this practice, Bruhat Bengaluru Mahanagara Palike (BBMP), the city’s civic body, has instituted one of a kind ‘shame’ campaign where eight feet by four feet mirrors are placed at black spots in the city.

For now, the municipal corporation has placed these mirrors at five prominent locations namely – K.R. Market, outside ESI Hospital in Indiranagar, near Jyoti Nivas College in Koramangala, on Queens Road, and on Church Street. The mirrors that have been up and running for a week now have managed to grab the attention of the citizens, both on and off social media.

We have got a positive response from the people and it has kind of gone viral. Overall people are happy with the initiative of shaming people, said B.H. Anil Kumar, BBMP Commissioner.

There were mixed reactions on Twitter. While some users lauded civic body’s move, others were of the view that the authorities could do a better job of fixing existing public toilets instead of spending lakhs on mirrors. The implementation of the creative ‘shame’ campaign has costed BBMP almost Rs. 2 lakh.

Here are some reactions to the Bengaluru municipality’s campaign holding up a mirror to those urinating in public.

One of the users requested the civic body to install similar mirrors on the walls of all underpasses in the city. In a comment, the user highlighted how people belonging to different stratas of life and even the one travelling in cars choose to urinate in open and wrote, “Sir please install near Basaveshwar Nagar underpass near chord road since night urinating people are from different class coming in Innova and other brands after party …..hope we see mirrors on walls of all underbridge .”

Sir please install near basaveshwar nagar underpass near chordroad since night urinating people are from different class coming in innova and other brands after party …..hope we see mirrors on walls of all underbridge .

Similarly, suggestion came in from other users for mirrors to be installed opposite Prestige Pine Wood in Koramangala, Electronic city, Hosa road, and Doddanagamangala area.

Talking about these suggestions from residents Mr Kumar, said,

We will wait for some time before taking this initiative across the city. We plan to give it two to three weeks, see the impact of the campaign and then decide.

A twitter user raised a different concern with the usage of mirror in the ‘shame’ campaign, he wrote, “Hope proper research was done. This will be very disorienting for drivers on the road. Also, the mirror will not work on corners, and near alcohol shops, drunkards will pee all over your mirror.”

hope proper research was done, this will be very disorienting for drivers on the road. Also the mirror will not work on corners, and near alcohol shops, drunkards will pee all over your mirror.

To this, Mr Kumar said,

I don’t think it’s correct to say. The mirrors or not located right on the roads, in fact, they are on the sides. I don’t think mirrors will cause any distraction and affect drivers.

Reacting to the initiative, an issue highlighted by many Bangaloreans is the dirty, unhygienic and dysfunctional public toilets. Sharing a couple of pictures of e-toilets (self-contained, self-cleaning, automated and remotely monitored toilet pods), a user asked BBMP to fix it.

Backing this argument, a couple of citizens highlighted the lack of public toilets in the city and requested for more toilets to be built. A comment read, “Stop open urination is very good initiative which is really appreciated and also kindly make sure sufficient public toilets are available, considering the population in Bengaluru enough public toilets are not available. Please look into that issue. We need to fix the route cause of the problem.”

Stop open urination is very good initiative which is really appreciated and also kindly make sure sufficient public toilets are available, considering population in Blre enough public toilets are not available Pls look into that issues.????
we need to fix route cause of the prob.

Bengaluru, a city with a population of over 84 lakh, was declared open defecation free (ODF) in September 2019 and has 418 public and community toilets and 169 e-toilets. BBMP commissioner agreed that the city doesn’t have enough public toilets. He said,

We are in the process of putting up another 300 toilets in various places. Because of this initiative, agencies like BMTC (Bangalore Metropolitan Transport Corporation) have come forward and are willing to provide us space for setting up public toilets. Earlier, we had to look for locationS, but now people are voluntarily offering us space.

Amidst this, a citizen highlighted the issue of overcharging by public toilet attendants and how it is not feasible for everyone to opt for pay and use toilets. He wrote, “Sir, there also be mirror kind arrangement on the overcharges by the attendant of the public-toilet and action taken on unhygienic or unclean toilets reported. Charges like Rs. 10/women and Rs. 5/men for urination is not affordable to the migrant workers earning Rs. 100/day.”

Sir, there also be mirror kind arrangement on the overcharges by the attendant of the public-toilet and action taken on unhygienic or unclean toilets reported. Charges like Rs:10/women and Rs:5/men for urination is not affordable to the migrant workers earning <Rs:100/day

Our idea and the motive behind this creative campaign is just to create awareness about open urination and make people use the nearest public toilet, community toilet and electronic toilet or e-toilet (self-contained, self-cleaning, automated and remotely monitored toilet pods), said Randeep D, Special Commissioner, Solid Waste Management at BBMP.

The mirrors have a QR code affixed on them which on scanning lands up on the google toilet locator where one can find the nearest public toilet established by BBMP. Along with this, there are two more QR codes for the user to access BBMP Sahaaya, a mobile application to complain about poor maintenance of public and community toilets.

The mirrors also carry a couple of awareness messages focused at maintaining cleanliness in the city – ‘avoid public urination, use public toilets’, ‘stop littering, use the dustbin’, ‘say no to single-use plastic, carry your own bag’, and ‘don’t spit in public, keep your surroundings clean’.

According to BBMP, every time the sanitary staff would clean black spots, the situation would get back to square one within days. But with this campaign which is also a part of the process to gear up for the all India cleanliness survey of cities Swachh Survekshan 2020, Bengaluru authorities are hoping to bring about a change. The city which was ranked 194 among 4,237 towns and cities surveyed in 2019, hopes to see marked improvement in its rankings.

We are an ODF city and now we want to be open urination free as well, signs off Mr Kumar.