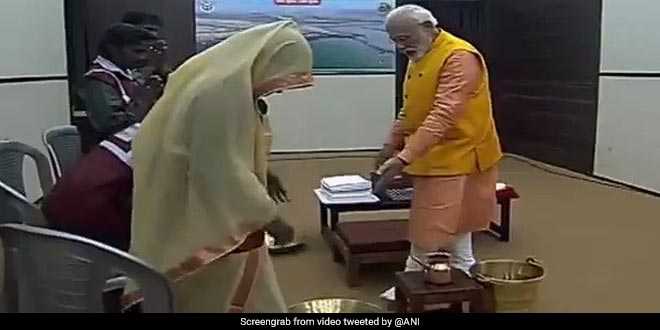 New Delhi: “Moments I will cherish for my entire life! Honouring remarkable Safai Karamcharis, who have taken the lead when it comes to realising the dream of a Swachh Bharat! I salute each and every person making a contribution towards a Swachh Bharat,” said Prime Minister Narendra Modi as he washed sanitation workers feet as a mark of respect to sanitation workers efforts in ensuring a clean Kumbh this year. PM Modi was taking part in the “Swachh Kumbh Swachh Aabhaar” award function on Sunday at Prayagraj, where he acknowledged the efforts made by the ‘swachh karmacharis’ to keep the Kumbh grounds clean and felicitated the swachhaagrahis (clean India volunteers) for their dedicated services at Kumbh 2019.

Honouring remarkable Safai Karamcharis, who have taken the lead when it comes to realising the dream of a Swachh Bharat!

I salute each and every person making a contribution towards a Swachh Bharat pic.twitter.com/IsjuCgjlkn

Asserting that keeping a particular area where 20-22 crore people had gathered is a big responsibility, PM Modi added,

This time, over 20,000 dustbins, 1 lakh toilets have been installed, it is difficult to even imagine how much sanitation workers have done to keep Kumbh 2019 clean. Our safai karamcharis have proved there is nothing impossible in the world. I salute each and every person making a contribution towards a Swachh Bharat. These safai karamcharis get up early every day, sleep late at night, they deal with garage all day long and do their bit to keep the toilets clean. They have continued to work for mission swachhata with all their hearts and it is because of their efforts, this time Kumbh is different, it is much cleaner. In fact, cleanliness has been the trademark of this Kumbh.

Highlighting the efforts that have been taken to keep Ganga clean at the Kumbh, PM Modi said,

Thirty-two drains falling in Ganga in Prayagraj were closed, and sewage water is diverted to treatment plant this year. I’ve never seen a more cleaner Ganga previously and this has happened because of the efforts taken to keep it clean.

He also added that the amount of money he received as part of the Seoul Peace Prize has been dedicated to Namami Ganga Mission so that the efforts to keep Ganga clean continues.

Talking about Clean India goals PM Modi said the whole country is progressing towards achieving open defecation free status before October 2, 2019, “Swachh Bharat Abhiyan is progressing at a good pace, I am sure, India will meet its Clean India targets much before the deadline,” added PM Modi.

Prime Minister Narendra Modi also took a dip at the Sangam and offered prayers during his visit to Prayagraj in Uttar Pradesh on Sunday.

Had the good fortune of taking a holy dip at the #Kumbh. Prayed for the well being of 130 Crore Indians. pic.twitter.com/jTI2QbmWxb