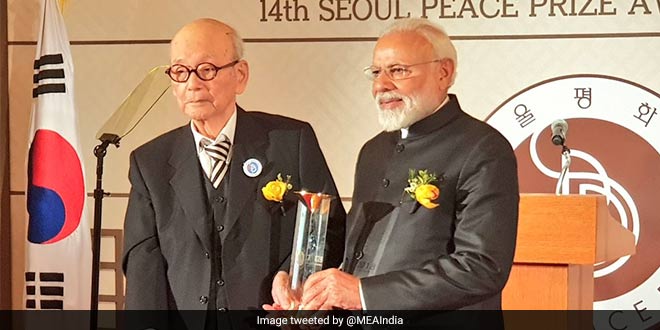 New Delhi: “I believe that this award belongs not to me personally but to the people of India. It belongs to the success India has achieved in less than five years powered by the strengths and skills of 1.3 billion Indians and on their behalf, I humbly accept the award and express my gratitude”, said Prime Minister Narendra Modi today as he received the Seoul Peace Prize 2018 from the South Korean government. The award was in recognition of his service to international cooperation, global growth and human development.

Award dedicated to people of India.

The Prime Minister added, “I am honoured that this award is being conferred on me in the year that we celebrate the 150th birth anniversary of Mahatma Gandhi.”

PM Modi further announced that the prize money would go to the Ganga clean-up project,

I would like to contribute the monetary award of $200,000 i.e. Rs. 1 crore 30 lakh to the Namami Gange fund for our efforts to clean river Ganga, which is not only held sacred by people of India, but also an economic lifeline of millions of people.

I would be giving the prize money of the #SeoulPeacePrize to the Namami Gange fund. It is our collective duty to ensure a clean Ganga, which is so central to our culture. pic.twitter.com/hoIkNVYIj2

Namami Gange is the flagship programme of the Modi government to accomplish the twin objectives of effective abatement of pollution, conservation and rejuvenation of river Ganga.

Prime Minister Modi has donated to the Namami Gange project earlier as well. In January, Union Minister of State for Culture Dr Mahesh Sharma, announced Prime Minister’s decision to auction all the gift items he has received during his national and international visits in the last four-and-a-half-year and donate the money raised to the Namami Gange project.

On January 27, about 1,800 mementos gifted to Prime Minister Narendra Modi since 2014 were auctioned at the National Gallery of Modern Art in New Delhi. From swords, musical instruments, turbans, shawls, traditional jackets, to bows and photographs of historical and political figures, varied souvenirs were auctioned.

He said the award was recognition of the philosophy that gave the world the message of “Vasudhaiv Kutumbkam (the world is a family)”.

It is for the culture that has given the message of peace even on the battle field. In the Mahabharata, Lord Krishna preached the Bhagwad Gita during the battle, he said.

The Prime Minister said, “The Seoul Peace Prize is for the land which prays may there be peace everywhere in the sky, in the space, all over the planet, in nature. May there be eternal peace.

The Seoul Peace Prize was established in 1990 to commemorate the success of the 24th Olympic Games held in Seoul. The award was established to crystalise Korean people’s yearning for peace on the Korean peninsula and in the rest of the world. Prime Minister Modi, is the 14th recipient of the award, first for an Indian.

3 Lakh Volunteers Collect 9,000 Tonnes Of Waste From Over 900 Hospitals In A Four Hour Clean-Up Drive Across India

100 Per Cent Mechanised Cleaning Going To Be A Reality In Railways: Railway Minister Piyush Goyal