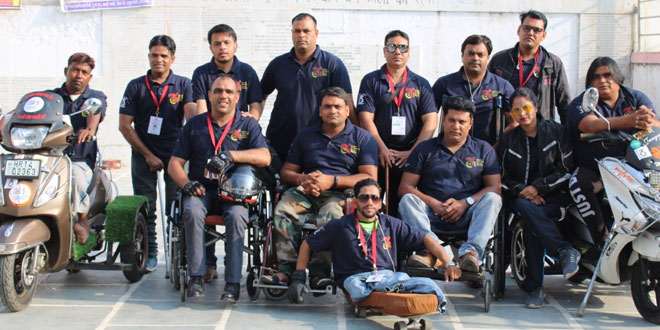 New Delhi: The story dates back to January 13, 1983, when the Siddiqui household in Madhya Pradesh’s Jabalpur was blessed with a baby boy. The family was more than elated to have a boy in the family after the birth of three girls. The little Aameer Siddiqui was growing up well and would walk around the house on his tiny feet until one day when his right leg stopped functioning. 18 months old boy woke up to the horror of a paralysed leg. The family took Aameer to various doctors in the village and even to in the nearby town but all in vain.

I was diagnosed with Post Polio Residual Paralysis, a condition that leads to disability and is not curable. I remember taking various medications till I was in grade 10 but there has been no respite. I underwent around 20 surgeries by the age of 17; again, these were all experiments and did little or to nothing to my leg, said Aameer while talking to NDTV.

However, the disability never stopped Aameer from living his life and getting the right education. At the age of 10, crutches became Aameer’s best friends that would escort him everywhere, even to the washroom. Since Aameer’s father, an engineer by profession, wanted him to get educated, he would drop his son to school daily. Gradually, Aameer started commuting on his own.

My father wanted me to study and get a government job. Today, I work for the Department of Education. When I moved to Delhi in 2001 for work, I started living with people with disabilities and fighting for their rights. For instance, when Lalu Prasad Yadav was railway minister, we fought for a special train coach for people with disabilities, said Aameer.

The sky is the limit if individual desires to spread their wings and live life to the fullest. Not even a disability of any form can become a roadblock. Aameer, fond of travelling founded ‘Eagle Specially Abled Riders’ along with three other friends.

Eagle Specially Abled Riders is a group of motivated, dynamic people with disabilities who travel on retro-fitted scooters across the country to spread awareness about various social issues ranging from women empowerment to inclusion and the importance of education for people with disabilities. Talking more about the idea, Aameer said,

Eagle Specially Abled Riders was established in 2015 with the aim of spreading awareness amongst people about social issues, and to draw attention towards disabled people. In most of the cases you would see that if there is a person with disability in a family, they would be often left alone at home while the family travels or attends functions. We want to change this notion that people with disabilities are a burden or dependent on someone. You can’t motivate people through words as much as you can do through a visual element. A film stays longer in your mind than a speech. So, when we travel on our own, we send across a message that if we can come to you all the way from Delhi on a scooter, you should also step out of your house.

Also Read: Leaving No One Behind: The Need To Build An Inclusive Society, One With Equal Access For People With Disabilities

The bikers plan their ride and pit stops in advance. On the journey, they stay locally and connect with locals on various social issues like women empowerment, disability, inclusion, and sexual abuse.

In 2019, the group of riders completed the world’s longest accessible awareness ride on the ‘Importance of Education for Differently-Abled’. The 3,500km long ride started on October 1 from India Gate in Delhi to Gateway of India in Mumbai and back to India Gate on October 15. The journey was covered on retro-fitted scooters.

In October 2021, our group of riders went to Kargil, via the Zojila Pass. It is difficult even for buses and scooters to reach there. But we had a passion within, which helped us reach our destination. Our team of 11, including four women, reached Kargil and hoisted the national flag there. It is said that at least 300cc bike is required to cover the path but we reached the destination in 12 days on our 110cc scooters. We wanted to shed the tag that ‘disabled people can’t reach Kargil’, said Aameer.

The 12-day ride had challenges like access to toilets, lack of lift facility in hotels, and heavy trucks speeding on the highway. Sharing certain challenges faced by her as a female rider, Mohini, Co-founder, Eagle Specially Abled Riders, said,

For instance, it is difficult for me to use the washroom on the highway when I am in a wheelchair. We need to ask for assistance and if we do, then we aren’t sure if the person helping us will touch us with the right intention. Situations like these create a big problem.

India’s disabled population stands at 2.68 crore, which is 2.2 per cent of the population, according to the National Health Portal of India. Despite the huge number of disabled people in the country, there is a dearth of ramps at public places, believes Ramesh Chand, Co-founder of Eagle Specially Abled Riders. He said,

An able-bodied person can use a ramp just as easily as stairs. Then what is the need for stairs? We must have ramps alone. The same goes for trains and buses. Buses have ramps only in the name; nobody waits long enough for us to use them.

Aameer said that the idea is to make tourist places accessible. On their journey, they take pictures of the road, toilets and other public spots which are then presented to the government along with their needs.

We work closely with various non-governmental organisations that help us raise our voices. We are seeing the change like Red Fort is now accessible to us, courtesy of the Rights of Persons with Disabilities Act, 2016. Recently, a temporary ramp was built at Chennai’s Marina beach for persons with disabilities. My colleagues help me plan my rides and chip in when I am off work. This shows that we are taking a step towards inclusivity, said Aameer.

During the Pandemic, the group came forward to help and tried reaching those in need by providing rations to security guards, rickshaw pullers, homeless people and migrant labourers.

What started as a close group by four friends now has around 70 members. However, only 10-15 people are selected for special rides based on their accessibility to scooters. Talking about how they want to shed ‘dis’ from their ‘ability’, Aameer said,

We do not wish to come across as beggars or as people who are doing this for sympathy. We want to be fully capable of taking care of ourselves, and in fact, helping others with our abilities.

Also Read: One Health, One Planet, One Future: ‘It Is Crucial To Leave No One Behind In Order To Grow As A Nation,’ Says Lakshyaraj Singh Mewar

New Guidelines For International Arrivals In India: No RT-PCR Test At Airport, No 7-Day Home Quarantine