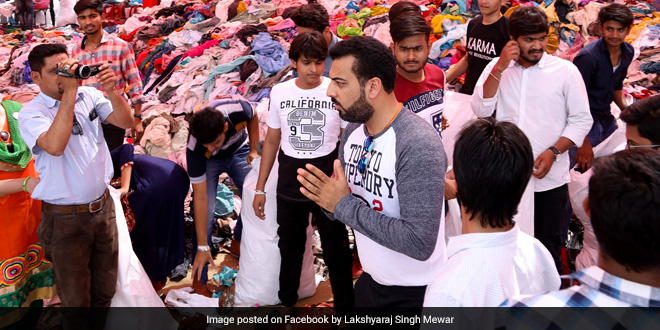 New Delhi: COVID-19 pandemic has magnified the need of helping each other. It has re-established the philosophy of ‘One World’ by reminding that people across the world are all interconnected—and that their health and well-being are dependent on how they treat each other. NDTV spoke with Lakshyaraj Singh Mewar of Udaipur, Trustee, Maharana Mewar Charitable Foundation, the 77th successor and a scion of the 1500-year-old House of Mewar on how to build a more inclusive, connected and caring world. He holds four records in the Guinness Book of World Records for most personal hygiene products donated in one hour, the largest collection of clothes for recycle/donation, the largest donation of school supplies in 24 hours, and most people potting plants simultaneously.

NDTV: Your commitment to social work is commendable, whether it is planting trees, helping the girl child, working with the indigenous communities and the vulnerable population. What inspires you?

Lakshyaraj Singh Mewar: As I have been working on all these various projects, I came across a formula- GGGN formula which stands for Greatest Good, Greatest Number. So, the idea is that when you are doing something, it has to be for the greatest good and the entire thought process behind this is to make sure that it is for the greatest number. So that is what the aspiration is.

NDTV: During the COVID-19 pandemic, what challenges did you face?

Lakshyaraj Singh Mewar: At that time, the whole experience of connectivity, being in touch with people, mindset, has been a complete eye-opener and one can say that one has been living there all their life but sometimes, the backyard, does amaze you, surprise you and throw different challenges at you. These challenges, I think are good and bad, both, but I think, coming out victorious at the end of it, seeing some light at the end of the tunnel, being able to help people in this process has been a great learning experience. Very happy to say that the help that came in for various projects during the pandemic was from across the country. Moreover, the fact that the faith that people had for the help being delivered to the right people, the end-user, was the greatest confidence booster and motivator in the entire process.

NDTV: On Banega Swasth India, Season 8, we are also going to be talking about ‘One Health, One Planet, One Future’ because at the end of the day, we are all connected. Do you think we need to look at the challenges of the world holistically?

Lakshyaraj Singh Mewar: Absolutely, I think certain tiring situations and calamities have forced us to go beyond geographical boundaries, something that we have seen as a culture for thousands and thousands of years, now this is something that is going out and becoming a global phenomenon- that the entire universe is our family. We are leading by example on this. Not only in our country, but people in other countries as well are following this. We are not only talking about this, but at the end of the day, we are walking our talk which is very important and creating a dent where it is necessary. Putting that helping hand out there where it is actually making a difference.

NDTV: A very important focus of our campaign is leaving no one behind. How important is it to reach out to the marginalised communities?

Lakshyaraj Singh Mewar: It is very important to reach out to those in need. Everyone must help as much as they can. This is not something that one can quantify, or rather one should even try to quantify. I am really happy to say that in Udaipur, the Rajasthan Police Force joined hands with me and helped in providing raw materials not only to humans but to also stray animals on the street. So, I’d like to thank them for coming out and help.

NDTV: You have taken the initiative towards protecting the environment besides tree plantation. Do you think, people’s well-being is also connected with the health of the environment?

Lakshyaraj Singh Mewar: People who were locked up in their homes and did not have an opportunity to go out and buy a pot, to be able to nurture your own space, or to be able to look after certain things, think the connectivity back with mud and the nature, with your children or yourself was something that was a great awakening for the people. And now we know that moving forward, protecting the environment especially is going to be very important. And in this regard, the geographical location really does not matter. There might be something catastrophic going on somewhere far from me, that will have an impact on me as well. Eventually, we all have to understand that this is something we all have to take responsibility for.

NDTV: Royal family of Mewar has supported many cause and education is one. Over 150 years ago, your family started girls’ school. What are your thoughts on education for girls who are usually left behind when it comes to education?

Lakshyaraj Singh Mewar: A lot of people in pre-independence India did not want their girls to go to school. The school for girls was started way back in 1864 to promote girls child education and tell people that is important to send girls to school. Education is absolutely very important for bringing the girl child on the forefront, making them a part of the society. Girls are supposed to be left inside the closed doors or not to be educated. I strongly beilieve that through education, our country will be able to grow more and 19th Century belonged to the UK, 20th Century to USA, the 21st Cebtur will belong to India.