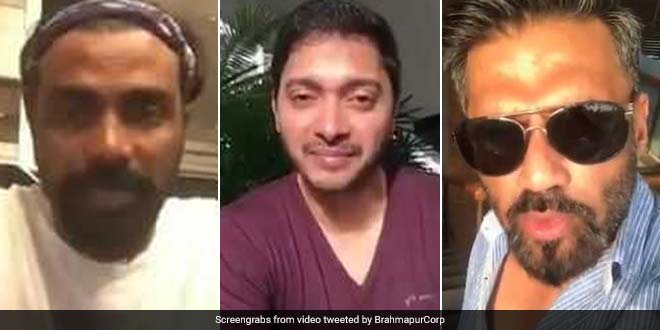 New Delhi: Encouragement goes a long way in boosting morale of those undertaking a good deed with a tough target. In its bid to make the city open defecation free (ODF) by December 2018, Berhampur in Odisha reached out to Bollywood personalities, to spread the message among its citizens to keep the city clean and help the municipal corporation achieve its ODF target. Actors Suniel Shetty and Shreyas Talpade, and choreographer and director Remo D’souza took to Twitter to reach out to the people of Berhampur, asking them to extend their cooperation to the city’s civic body.

In his video message, actor Suniel Shetty requested the people of Berhampur to keep their city clean. Urging people to use toilets and not defecate in the open, the actor said that open defecation was one of the key causes of various diseases, and must be avoided. Highlighting that the city’s civic body has built proper toilets for its residents, the actor requested citizens to keep themselves healthy by using the toilets regularly.

In his message, actor Shreyas Talpade said that cooperation from every Berhampur resident was necessary to make the city open defecation free, and the December 2018 target could only be achieved when everyone used public toilets. Choreographer turned director Remo D’souza echoed similar sentiments. Mr D’souza said that it was the responsibility of the citizens to ensure cleanliness across the city. He also requested people to regularly use public toilets around the city and keep these clean.

‘Mission ODF Berhampur’, is the flagship campaign of Berhampur Municipal Corporation’s (BeMC) to eradicate open defecation from the city and has found widespread support. The campaign to make the city ODF was flagged off in May, and a target of December has been set by the municipal corporation to make the city ODF. Rajib Lochan Gouda, a BeMC worker chosen as the mascot for the campaign, will cycle from Berhampur to Bhubaneswar to spread the message of cleanliness and safe sanitation. The BeMC has also arranged for a summer camp to train over 1,500 students in the concepts of health, hygiene and safe sanitation. Several activities have been organized to brief students on usage of toilets, washing of hands and maintaining general cleanliness. Students also took an oath to make Berhampur ODF by the end of this year.

I thank Suniel Shetty, Shreyas Talpade and Remo D’souza for taking out time to address the people of Berhampur and appeal to them directly. We are confident of going ODF by the end of this year, said Chakravarti Singh Rathore, Municipal Commissioner, Berhampur.

Some Berhampur based organisations, like the Youth for Social Development, have said that more needs to be done by the municipal corporation in terms of eradicating open defecation from the city. Sibaram Pradhan from Youth for Social Development said that the municipal corporation should invest more in not just building toilets, but helping people locate them and making them understand the importance of opting for safe sanitation. Only then will BeMC’s campaign deadline of going ODF by December 2018 be truly met, said Mr Pradhan.

Technology For A Swachh Purpose: Indian Railways Turn To WhatsApp To Monitor Cleanliness Of Trains