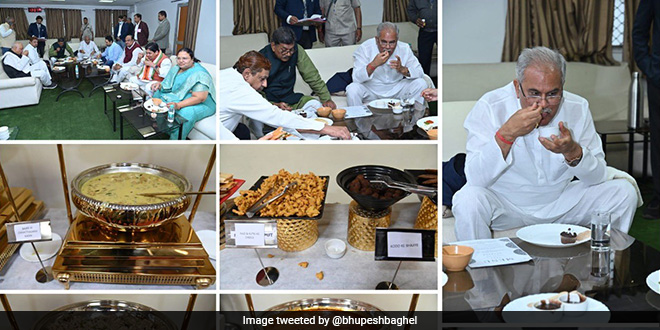 Mr. Baghel also highlighted that Chhattisgarh is the country's first state to purchase millet at a support price.

Raipur: With an aim to promote the Millet Mission in the state, Chhattisgarh Chief Minister Bhupesh Baghel on Wednesday organised a lunch for the Ministers and legislators at the Vidhan Sabha where millet dishes were served to all. A wide variety of millet dishes including ragi-pakoras, kodo-bhajiya, kutki-ke-fare and ragi halwa were served during the sumptuous lunch, which was highly appreciated by the CM and the Speaker of the Legislative Assembly Dr Charan Das Mahant who was also present at lunch.

The Ministers and the legislators also enjoyed the lunch. During the lunch, CM Bhupesh Baghel said that on the suggestion of Prime Minister Narendra Modi, Millet Cafe will also be opened in the Mantralaya soon. The country’s first Millet Bank has been started in Chhattisgarh where 22 types of millets are produced.

The CM also announced that the Millet would be included in the mid-day meal scheme to eradicate malnutrition in the state. He said that children in schools are being given dishes made of millet in the mid-day meal, including cookies, laddoos and soya-chikki.

Mr. Baghel also highlighted that Chhattisgarh is the country’s first state to purchase millet at a support price.

Under this mission which is operated in 14 districts of the state, along with fixing the support price of Kodo-Kutki-Ragi, arrangements were also made for collection through women self-help groups under the Chhattisgarh Small Forest Produce Cooperative Union. Input subsidy is also being given to the farmers by including these crops under the ambit of the Rajiv Gandhi Kisan Nyay Yojana and farmers are being made aware by experts to increase productivity, the CM added.

Mr. Baghel further added that an MoU has been signed between the Indian Institute of Millet Research, Hyderabad (IIMR) and 14 district collectors.

IIMR has also taken the responsibility of providing good quality seeds of Kodo, Kutki, and Ragi as well as helping in setting up of seed bank. Along with this, IIMR is also giving training to the farmers, he said.

Related Topics:
Millets Nutrition
Up Next