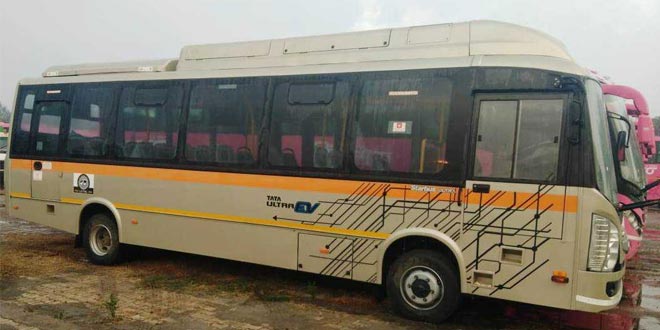 New Delhi: Uttar Pradesh (UP), home to Lucknow, Kanpur, and Varanasi, three of the most polluted cities in the world, according to the World Health Organization (WHO), will be getting 580 electric buses by the end of 2019 to combat the rising air pollution. According to the state government of Uttar Pradesh, the e-buses will be deployed across seven cities in Uttar Pradesh- 100 each in Lucknow, Kanpur, Ghaziabad, Prayagraj, Agra, 50 in Varanasi, 20 in Gorukhpur, and 10 in Saharanpur.

According to Ajit Singh, Joint Director, Urban Transport, Government of UP, the government will not be purchasing these buses but will be hiring services from operators who will be finalised by competitive bidding. The operator will be allowed to get buses from any manufacturer but will be running the buses as per regulations defined by the State of UP. The government of UP is also planning to provide Rs. 30 lakh per bus subsidy to the operators to support them in procuring e-buses and running them.

Mr. Singh informed that trial of one electric bus is already going on currently in Lucknow which will be completed by March 31st, after which 40 e-buses will be deployed in the state capital by June and by the end of this year, 60 more e-buses will be added to the fleet. The fare of these buses will be Rs. 1.75 per km, same as charged for the conventional AC buses. Mr. Singh said,

E-bus running currently on trial is a 30 seater bus and has a capacity of having 50 passengers on board comfortably. The bus can run for 150 Km at the maximum speed of 75 Km/h on one full charge and can be charged 100 per cent in two hours by fast chargers.

The state government is planning to focus on operating 100 e-buses in Agra after deploying buses in Lucknow. The e-buses in Agra will be running across Agra and Mathura which fall under the eco-sensitive Taj Trapezium Zone (TTZ).

The state government of UP is also working towards building a robust charging infrastructure for electric buses simultaneously. Charging stations will be installed in the eight cities where the buses will be deployed. Eighteen charging point has been installed in Lucknow at two places – 12 points in bus depots and six at various places in the city. Uttar Pradesh State Road Transport Corporation is also building separate bus depot dedicated to electric buses. A dedicated depot is under construction at Dubagga, Lucknow and will be completed by March 15. In other cities, chunks of land have been identified and are in the process of being purchased.

Talking about the need for a transition of current public mobility to electric, Mr. Singh said,

Its Pollution! Air pollution is so much in the state and it is a matter of grave concern that UP has three out of 20 most polluted cities in the world. Electric buses can help in tackling this problem to some extent as a bus is a mode of transport for masses and travel long distances within the city and inter-city. E-buses do not emit pollution and are also noise free. Plying 100 buses in a city will definitely bring some change in the overall environment of the cities.

He further asserted that the e-bus on trial is getting a good response from the people as they are curious about electric- buses. He further said that the number of electric buses would grow in the city and the visibility increases, people would start preferring electric-buses over the fossil-fuel burning buses.