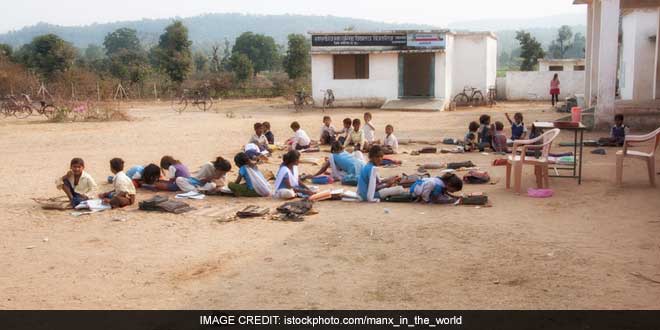 New Delhi: In several meetings, press conferences and announcements related to the Swachh Bharat Abhiyan, representatives and officials of Central and state governments have always reiterated the importance of focussing on behavioural change to ensure safe sanitation and usage of the toilets built. But the Swachh Bharat Abhiyan also has a deadline attached to it, that of making the whole country open defecation free (ODF) by October 2, 2019. In a rush to meet deadlines, desperation may set in and instances related to the same are coming to the fore. In Rajasthan, several district administrations are allegedly taking desperate measures ranging from suspension of rations to denial of work to meet the state’s ODF deadline.

It all started in May 2017 when then Minister for Urban Development, Venkaiah Naidu, visited Rajasthan to attend a conference on the state’s performance in the sanitation sector. Mr Naidu expressed his displeasure at the conference, indicating that while certain rural areas of Rajasthan had done well in eradicating open defecation, the state still had miles to go before achieving the ODF tag. He also spoke at length about the performance of major cities like Jodhpur, Jaipur and Udaipur’s performance in Swachh Survekshan 2017, as these ranked 209, 215 and 310 respectively. The state government’s push came almost immediately as it ordered an analysis on the state’s Swachh Bharat performance in both rural and urban areas and asked local administrations to take necessary steps to meet the October 2019 ODF deadline.

The Department of Panchayati Raj in Rajasthan states that till July 2017, 63 lakh households out of the state’s 83 lakh had built toilets, accounting for 75 per cent of the households. The trouble for Rajasthan, however, came in July 2017 when the Panchayati Raj department could confirm only 18 lakh completed toilets, as per photographs uploaded by local administrations. This revelation, along with Mr Naidu’s unpleasantness with the numbers caused the state take up some stern measures to ensure that toilets construction is executed quickly. But the alleged processes undertaken to ensure the building of more toilets has already generated some controversy as these seem to be coming at a cost of denying some basic facilities to the public.

The importance of sanitation is undeniable but that should come with awareness and proper supply of toilet building materials for people who do not have toilets in their homes. Arresting people or denying them ration will not serve the purpose of the Swachh Bharat Mission as people will then build toilets out of fear and not out of understanding the importance of sanitation, which can impact the campaign’s long term goals, said Ajay Sharma, Member of Rajasthan Gramin Vikas Sangathan, an NGO working for rural development in the state.

Mr Sharma’s comments refer to an incident on August 20, when six people were allegedly arrested in Bhilwara for defecating in the open. Though released on bail the next day, the district administration was notified of the arrest. In Jhalarapatan district in Jhalawar, rations were reportedly blocked for a few villages, citing lag in toilet building activity. Rations were also allegedly blocked in Rajsamand district. Many villagers had to return to their homes empty handed from rations shops and were asked to first build toilets before coming over to collect ration.

The toilet construction activities had come to a standstill for several weeks so ration shops were asked to pause ration distribution till constructions resumed. We wanted to motivate them to continue construction with the same pace as they had begun, said Jitender Kumar, District Collector, Jhalawar.

The problems with these alleged restriction orders is that there is still no clarity on whether there is consent from the upper levels of administration on placing such restrictions. The NGO Rajasthan Gramin Vikas Sangathan spoke to a few administrative officials who said that they had issued verbal orders to place restrictions but did not receive anything formal from the state government. Though not on a large scale, administrative coercions are said to be going on in Rajasthan for nearly a year, despite no formal announcement of either punishing practitioners of open defecation or stopping ration supply on behalf of the state government. The question then remains, are such restrictions being imposed by officials to improve block/district performances? The Panchayati Raj Department did not respond to NDTV’s queries.

Initially we would only tell the villagers about such restrictions, that too only in villages where construction activities had come to a standstill. But the situation has now taken a bad turn as many districts and blocks are actually imposing restrictions on ration and daily work if toilets are not built. This is unfortunate, said an official from Jhalawar District Administration.

Lack of water is another problem rural Rajasthan has to cope with. In many villages, piped water supply is scarce and given the geography of the state, water availability is low. Members of the Mazdoor Kisan Shakti Sangathan (MKSS), between April and July 2017 visited some villages in Karauli, Baran and Dausa, where water is traditionally scarce. They observed that villagers restricted themselves to using one toilet for two or three households to save water. The districts’ inability to supply continuous piped water in all villages is a major reason why toilet usage across many villages in Rajasthan is low. In such situations, placing restrictions adds to the problems of people, instead of solving them.

Nobody undermines the success of the Swachh Bharat Abhiyan but such a large scale initiative is bound to have problems. In many villages, people do not have access to adequate water, construction materials and even enough money to build toilets. How will imposing restrictions on ration, jobs or arresting them going to help? asks Shankar Singh, member of MKSS.

The success of the Swachh Bharat Abhiyan is important for not just Rajasthan but for India as well. But instances of such alleged restrictions show that meeting the target within the set deadline may take priority over the much publicised and needed behavioural change policy the Abhiyan is committed to follow. Sanitation experts have previously showed concerns related to the target oriented focus of the mission and have questioned what would be the implications in case targets weren’t met. The Rajasthan incidents show that coercion of any kind can take away the focus from Swachh Bharat Abhiyan’s primary goals. If becoming ODF is indeed the ultimate goal, methods should be employed to take into account associated issues of water and finance to ensure toilet usage and not just building is given importance.

Poor Drainage And Sewage System Is The Real Cause Of Urban Flooding: Experts