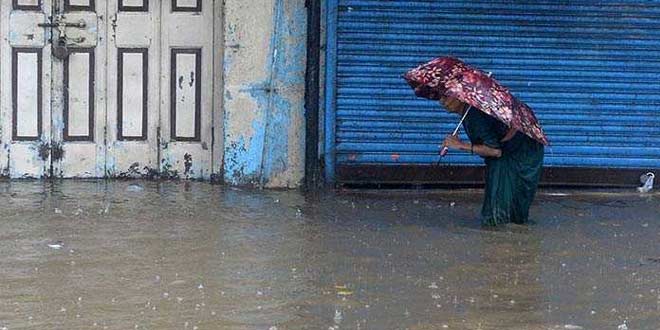 New Delhi: Urban floods are entirely manmade with poorly maintained drains, plastic bags, shrinking open spaces and climate change contributing to accumulation of water on roads after a heavy downpour, experts say. They said that steps such as rainwater harvesting, ban on use of plastic bags and better use of weather forecasts will go a long way in helping tackle flooding in cities after rains. Heavy downpours have been disrupting normal life in almost all metro cities in India, with Mumbai bearing the brunt last month which led to death of at least six persons.

Experts said a range of factors including rapid migration to urban areas and “lackadaisical attitude” of civic authorities were among the factors that contribute to cities coming to a standstill after heavy rains.

They said citizens also have to behave responsibly and ensure that plastic bags or used food plates are not thrown in the open or in the neighbourhood drains.

V.K. Sharma, Senior Professor of Disaster Management at the Indian Institute of Public Administration (IIPA) said the cities need a proper system of garbage collection and sewage disposal and regular cleaning of drains.

It is true that poor drainage and sewage system is the real cause of urban flooding. There is also migration to cities which often leads to land encroachment and exerts pressure on the existing civic infrastructure, Mr Sharma told IANS.

Mr Sharma said the urban planning has to have a long-term perspective and infrastructure should keep pace with growth of population. He said rain water harvesting should be made mandatory.

There is also the need of fixing accountability of government officials and municipal authorities if drains are not properly cleaned. Strict penalties should be imposed on people throwing garbage in the open, he said.

He said steps have been taken at some places to ban use of plastic bag but it should be enforced strictly.

There is a need to make people aware. This will also meet the larger goal of cleanliness, he said.

Mr Sharma said that prediction of the meteorological department are fairly accurate and authorities can issue timely alerts to people in case there is prediction of very heavy rainfall. “This will also help prevent loss of life,” he said.

Santosh Kumar, a professor at the National Institute of Disaster Management with expertise in disaster risk reduction and policy planning, said climate change was also a factor in cities getting excessive rainfall.

“Urban flooding occurs when water flows into an urban region faster than it can be absorbed into the soil. Earlier, a city received such amount of rainfall in two to three weeks,” Mr Kumar said, referring to Mumbai getting 350 mm rainfall on August 29-30. He said the cities do not have spaces to absorb the excess water or to store it.

Rapid urbanisation, industrialisation and population growth have also contributed to drainage systems getting congested. These drains are not able to take the pressure of huge water accumulated due to heavy rain, leading to waterlogging, Mr Kumar told IANS

He said steps should be taken to improve garbage disposal and ensure that plastics do not find their way to drains.

Vinod Kumar Jain, director of NGO Tapas which works in revival of water bodies in Delhi, said “water harvesting can play a significant role in reducing the chances of flooding in urban areas.”

Rainwater harvesting refers to trapping and storing rainwater so that it can be used at a later time when the need arises.

Heavy rainfall in Delhi last month had flooded roads and caused huge traffic snarls. On August 19, many parts of Chandigarh were flooded due to heavy rains. Chennai had witnessed severe flooding in 2015 while floods in Mumbai in 2005 had killed over 500 people.