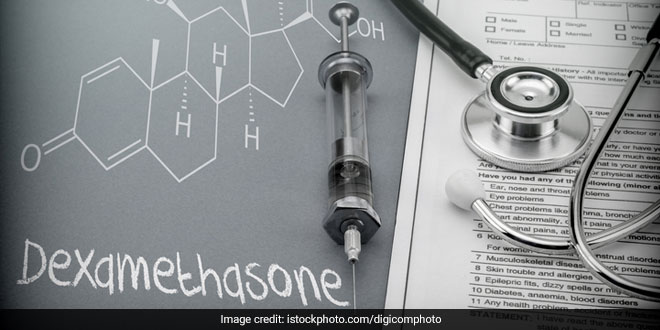 New Delhi: Oxford University researchers this week announced the results of ‘Recovery Trial’ for the dexamethasone, a low-cost, widely used steroid in treating COVID-19 patients. According to the researchers, giving low doses of the dexamethasone drug to patients admitted to hospital with COVID-19, reduced death rates by around a third among those with the most severe cases of infection. Senior Doctor from Delhi’s Sir Gangaram Hospital, Pulmonologist, Dr Arvind Kumar, told NDTV that in the gloomy background of last 4-5 months of fighting the virus, it is the first drug which has been shown to have a significant impact on mortality in the groups which saw the highest deaths.

It was a randomised trial, in which you take ’n’ number of patients, divide them into two groups and assign a drug randomly to those groups. So one group gets the drug, the other group gets a placebo, and you follow them up. After a certain amount of time, you see which group is doing well. If the group with the drug is doing well, it is obviously because of the drug. So at Oxford, they had a large number of patients, 2,104 as per the University data, who were given dexamethasone for 28 days, while 4,000 were not. At the end of 28 days, when they looked at the mortality rate for this period, there was a one-third reduction in the mortality of patients on a ventilator.

Also Read: Dharavi’s Success Story: How Asia’s Largest Slum And A Thriving Hotspot Got A Grip On COVID-19

Dr Kumar further said that in the group, where the drug wasn’t given, 41 per cent of the patients who were on ventilator died due to the coronavirus, but in the group which were getting this drug, the mortality rate was 28 per cent. He added,

Similarly, those COVID-19 patients who were on oxygen, 25 per cent of the people who were not getting this medicine died, while 20 per cent died in the group that took the medicine. They said 1 out of 8 patients on ventilators and  1 out of every 25 patients on oxygen is being additionally saved by the use of this cheap, worldwide available medicine.

Mr Kumar said that the medicine is basically one of the forms of steroids, which in different preparation, different doses, are used in Intensive Care Units (ICU) across India. He further informed that In India, the medicine was already being used by various hospitals in treating critically infected patients with COVID-19. The trial, he says, just proved it to be effective. He said,

A large number of ICUs across our country, including our ICU in Sir Gangaram hospital has been using dexamethasone since the time COVID patients started coming. What has happened now is that now there is a strong trial which has proved it to be of definite measurable scientific benefit.

Also Read: Delayed Admissions And Lack Of Healthcare Workers, Doctors Talk About The Challenges Faced By Hospitals In Tackling COVID-19

However, Dr Kumar cautions everyone against the use of this medicine without any medical supervision. He warns,

There are three important things to note here, first, this medicine is only to be used by doctors and not people, this shouldn’t be used without doctor supervision. Secondly, it is very important to note that this drug has only shown to be of benefit in patients who were on ventilators or who were on high dose oxygen support. In the groups which were not on oxygen or ventilators, this drug didn’t show any benefit in survival. And lastly, this drug is a steroid so it can potentially cause problems with sugar and if taken unsupervised for long it can actually reduce your immunity. Therefore, I’m asserting an expert supervision in consuming this particular drug.

Mr Kumar signed off by saying that 85 per cent COVID-19 patients in general across the globe fall in the mild-category of infection and this drug has no role at all in their treatment.

Also Read: In The Size Of 22 Football Fields, Delhi Gets The World’s Largest COVID-19 Care Facility, With Recyclable Beds

Coronavirus Prevention: How To Wash Fruits, Vegetables And Other Perishables To Safeguard Them From Virus

Coronavirus Outbreak Explained: What Is A Cytokine Storm And How Is It Fuelling COVID-19? Experts Answer