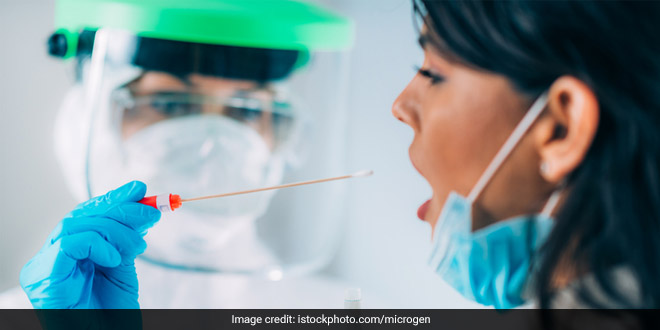 New Delhi: As the COVID cases are on rise in the country, especially in the national capital, ahead of the festival season, experts feel that the infections are mild but are underreported. According to Dr S Chatterjee, Senior Consultant Internal Medicine at Indraprastha Apollo Hospital, it seems as if the coronavirus next wave has already started as a huge number of cases are coming and most of them are underreported.

The number of cases are huge at this moment in the city. I think it has been underreported because quite a few people not even getting themselves tested. The doctors also not advising and the patients are also not getting tested, Dr Chatterjee.

He further said that if the testing is increased then the daily number of cases will also increase.

So, if we start testing more number of people, then the number of cases will be higher because every other day I receive calls that they are suffering from fever, and most of the people will say that, simple flu. But what I think is that they should be tested for COVID and at the same time they should be also tested for swine flu. Because we are seeing a huge uptick in the cases, said Dr Chatterjee.

“Most of the people are coming out to be positive. So what we can see is that the number of cases are definitely higher,” he added

Dr Chatterjee said that severity is low in cases of those who are testing positive for COVID-19, however, he said that the hospital admissions also have increased but the severity is not that bad.

If you talk about the severity or hospital admissions it has increased, but the severity is not that bad. Most of the people are surviving, and it’s not a serious disease. But we need to be careful because one out of those numbers might become sick, because of the vulnerability and because of the comorbidity, he said.

On the fourth wave, Dr Chatterjee said it looks like our country is witnessing another wave in the manner cases are being reported daily.

The way the numbers have increased in the last couple of days, I would think that is the beginning of the wave already. Because anybody you speak with almost somebody, one of the family members has COVID these days when they are testing. So I think is already the beginning because the numbers have risen like that, he said.

“But yes, there’s nothing to panic about but really to be careful. The good thing is that obviously, the vaccines have worked. Maybe the strain is also weaker this time at this moment,” added Dr Chatterjee.

He also said that vaccines are effective and there is nothing to panic about at all.

Dr Chatterjee further said that children are being infected with COVID-19 because they are going to the schools but none of them has required admission.

Children are getting sick because they are going to the schools. People are going to college. They are also getting sick, but as I said, none of them are requiring really admissions to a hospital, he said.

Talking about the symptoms, he said that symptoms are almost similar and most of the people would have a runny nose, sneezing sore throat, cough, headache, and body ache a few with diarrhea and a few people only present with headache and tiredness is a similar spectrum of symptoms.