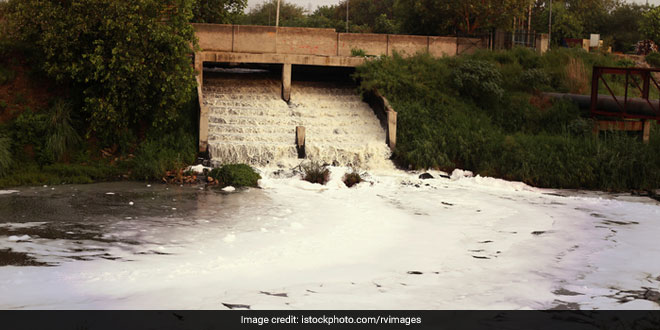 New Delhi: The Delhi Pollution Control Committee (DPCC) has told an NGT-appointed panel for monitoring pollution in the Yamuna that sewage containing detergent was responsible for the toxic foam seen in the river in July. The two-member Yamuna Monitoring Committee, comprising retired National Green Tribunal expert member B S Sajawan and former Delhi chief secretary Shailaja Chandra, had last month asked the Central Pollution Control Board, DPCC and Industries Commissioner to take prompt action to detect the source of the froth in the river and act against those responsible.

The presence of dhobi ghats, direct release of sewage containing phosphate detergents, industrial effluent and the turbulence caused near the barrages have been found responsible for the presence of foam in the river, the DPCC told the Yamuna Monitoring Committee.

The YMC, however, has asked the DPCC to furnish a detailed report within a week.

No detailed report on other quality parameters has been furnished. The YMC was expecting a much more comprehensive analysis; instead a serious matter has been disposed of with a terse finding that the presence of sodium tripolyphosphate in the detergents was responsible for the foam, it said in a letter to the DPCC.

Twenty-three drains join the Yamuna in the Delhi stretch of the river, all of which carry treated and untreated sewage and industrial effluent.

A detailed analysis linking pollution to the quality of waste water in different drains and quality parameters assessed at different locations would have given a better idea of the major hotspots of pollution along the length of the river so that attention could be focused on those drains, spots and catchment areas responsible for causing increased pollution, it said.

The DPCC has nine river quality monitoring stations along the length of the Yamuna. The panel has now directed the DPCC to undertake a comprehensive assessment of pollution in the river, drain joining the river and quality parameters measured along its length, and submit a report within one week. The panel also asked the DPCC to submit a detailed compliance report along with punitive action taken against defaulting industries, drain owning agencies and individuals causing pollution by August 10.

68 Per Cent Males, 32 Per Cent Females Died Due To COVID-19: Health Ministry