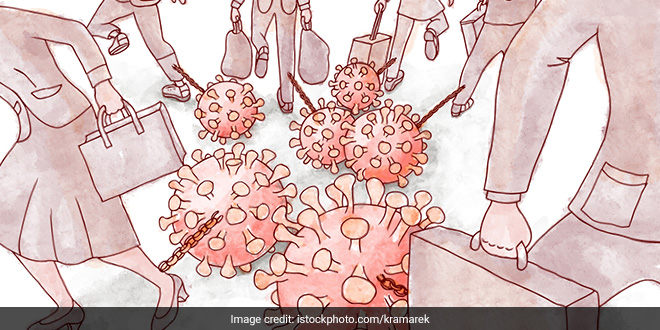 Health Minister Mansukh Mandaviya strongly advised states to ensure no wastage of COVID-19 vaccines at any cost, through active monitoring and on basis of “first expiry, first out” principle

New Delhi: With some states witnessing a spike in COVID-19 cases, Union Health Minister Mansukh Mandaviya asserted on Monday (June 13), that the pandemic was not over yet and stressed being vigilant and observing Covid-appropriate behaviour. The minister appealed to states and union territories to continue and strengthen surveillance and focus on genome sequencing for identifying new variants in the country. The minister held a meeting with health ministers and senior officials of states and union territories via video conference to review the progress of the vaccination exercise under the Har Ghar Dastak 2.0 campaign, the Health Ministry said in a statement.

Highlighting increased case positivity rate in some districts and states and reduced COVID-19 testing, Mandaviya stated that increased and timely testing will enable early identification of cases and help curb spread of the infection in the community.

The minister stated that the five-fold strategy of test, track, treat, vaccination and adherence to COVID-19-appropriate behaviour needs to be continued and monitored by states and UTs. States were also urged to focus on implementing the Operational Guidelines for Revised Surveillance. Strategy for COVID-19 which focuses on surveillance of incoming international travellers and surveillance through health facilities, labs, community, etc.

Also Read: Mumbai Records 1000 Per Cent Rise In Daily COVID Cases In Less Than A Month

Stressing on the importance of COVID-19 vaccination among the vulnerable age groups, he urged the state health ministers to personally review the status and progress of the special month-long drive Har Ghar Dastak 2.0 campaign which started on June 1.

Let us accelerate our efforts to identify all beneficiaries in the 12-17 age group for the first and second doses, so they can attend schools with the protection of the vaccine.

He urged states for focussed coverage of the 12-17 age group through school-based campaigns, along with targeted coverage of non-school going children during the summer vacation, he added saying that the population group of above 60 years of age is a vulnerable category and needs to be protected with the precaution dose.

Our healthcare workers are going from door-to-door to ensure that the vulnerable population is administered the precaution dose.

The health ministers of states were urged to also review the administration of precaution dose to the 18-59 age group with the private hospitals on a regular basis, in a statement he said,

We can utilise the learning from the first Har Ghar Dastak campaign to aim for achieving 100 per cent coverage among eligible population for ensuring extended protection against COVID-19. Adequate vaccine doses are available across the country. Let us ensure accelerated coverage of Covid vaccination during the second phase of Har Ghar Dastak campaign.

The states were also strongly advised to ensure that there is no wastage of COVID-19 vaccines at any cost. This must be ensured through active monitoring and on basis of “first expiry, first out” principle, where doses that expire earlier should be used for vaccination first, according to the statement.

Air Pollution Is Reducing Life Expectancy In India By 5 Years And In Delhi By 10 Years: Study