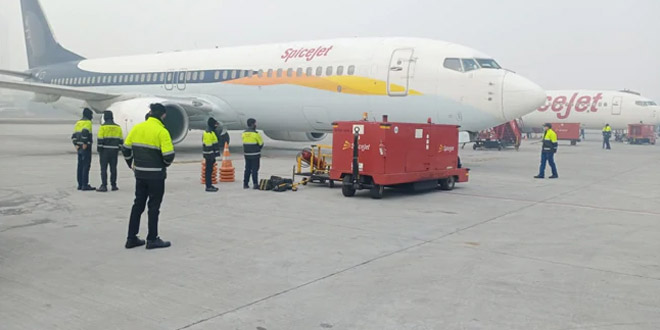 New Delhi/Pune: A massive pan-India inoculation drive against COVID-19 was set in process with more than 56 lakh doses of the Covishield vaccine leaving Pune for 13 cities across India on Tuesday (January 12), four days before the vaccinations are scheduled to begin on January 16. The first consignment of the vaccines rolled out of the Serum Institute of India facility in Pune early Tuesday (January 12) and reached Delhi a few hours later. The vaccine movement has started, Civil Aviation Minister Hardeep Singh Puri said on Twitter. Four airlines will operate nine flights to transport 56.5 lakh doses of the vaccine from Pune to 13 cities across the country on Tuesday, he said.

Also Read: Centre To Bear Expenses For First Round Of Vaccination, Jabs For 30 Crore In First Few Months: PM Modi

Covishield is developed by Oxford University and British-Swedish company AstraZeneca and manufactured by the SII. The first two flights operated by “SpiceJet and GoAir from Pune to Delhi and Chennai have taken off”, the minister said in the morning.

The Delhi flight was followed by multiple flights to different cities with the airline transporting close to four million Covishield vaccine doses weighing around 11 tonnes on the very first day of shipment, the Gurugram-based airline said in a statement. The SpiceJet flight carrying the vaccines landed at Delhi airport around 10 am. It left for the national capital around 8 am. A ‘puja’ was performed before the three temperature controlled trucks rolled out of Serum Institute gates shortly before 5 am and moved towards the Pune airport, about 15 km away, from where the vaccines were flown across India. The “vaccine to kill the disease is being loaded onto the aircrafts for distribution all over the country now”, Pune airport tweeted.

Ready get set go!
Stand by India!
The vaccine to kill the disease is being loaded onto the aircrafts for distribution all over the country now.@AAI_Official @aairedwr pic.twitter.com/5lY9i4Tjdk

Other airlines that transported the vaccines from Pune on Tuesday are GoAir, IndiGo and Air India. Air India said it carried its first consignment of 2,76,000 vaccine doses, weighing 700 kg approximately, from Pune to Ahmedabad. IndiGo said it moved 900 kg from Pune to Chandigarh and Lucknow via flight 6E 6515 and 6E 882, respectively.

#FlyAI : Air India is all set to play a pivotal role in vaccination mission, carrying the first consignment of 2,76,000 vaccine doses weighing 700 kgs approx from Pune to Ahmedabad today. pic.twitter.com/ODcRSpVGQb

We will be carrying multiple vaccine consignments to different Indian cities including Guwahati, Kolkata, Hyderabad, Bhubaneswar, Bengaluru, Patna and Vijayawada through the day today. SpiceJet is fully committed and prepared to transport the Covid vaccine both within and outside India, added the SpiceJet CMD.

We at GoAir are overwhelmed with the kind of responsibility bestowed upon us to transport the life-saving COVID-19 vaccines. We are grateful that we have got an opportunity to be able to contribute to the vaccine movement and support the noble cause, GoAir CEO Kaushik Khona said in a statement.

“In our efforts to alleviate the complexities of the vaccine movement given the scale of the consignments and logistics, we are taking every possible step to support the institutions and our stakeholders to reach the vaccine in all possible corners of the country,” he added.

The government on Monday (January 11) placed firm orders in advanced commitments for over six crore doses of COVID vaccines from SII and Bharat Biotech for inoculating three crore healthcare and frontline workers in the first phase of the vaccination drive scheduled to start from January 16. The cost is Rs.1,300 crore.

Bharat Biotech has developed the indigenous vaccine Covaxin in collaboration with the Indian Council of Medical Research and the National Institute of Virology. Interacting with chief ministers on Monday (January 11), Prime Minister Narendra Modi underscored the enormity of what he called the world’s biggest vaccination exercise. Over 30 crore citizens will get the jabs in the next few months in India against only 2.5 crore people vaccinated so far in over 50 countries in around a month, he said.