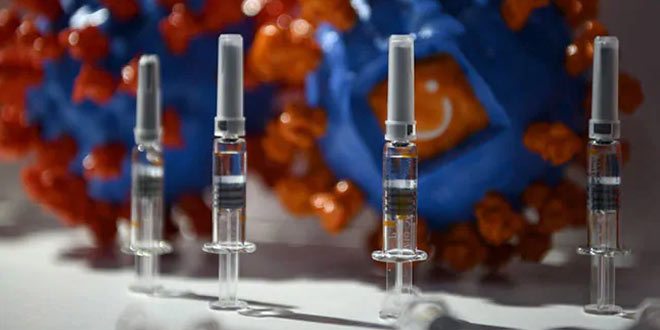 New Delhi: With an aim to stop the COVID-19 pandemic soon, the scientists are hoping to deliver a vaccine that protects against coronavirus by early 2021. A vaccine goes through multiple stages before being approved for public use but for countering the pandemic, the vaccine development process has been rapidly accelerated. The major stages of development, according to the Centers for Disease Control and Prevention (CDC), include initial research followed by a series of pre-clinical trials which are mostly done on animals and clinical or human trials consisting of three phases. While, as per CDC, each step can typically take two years or more to complete, some steps are being combined, run in parallel or skipped in case of COVID-19 vaccine development. There are currently nine pharmaceutical companies in the world that are in late-stage Phase 3 trials for their vaccine candidates. British-Swedish pharma company AstraZeneca which is developing a vaccine in collaboration with the University of Oxford is also among the frontrunners in the global race for a COVID-19 vaccine. However, the company had to face a disruption as it had to suspend global trials of the experimental coronavirus vaccines on Tuesday after an unexplained illness was reported in a trial participant, according to the company’s spokesperson.

The spokesperson of the company said that pausing trials is a routine action which has to happen whenever there is a potentially unexplained illness in one of the trials. The illness is investigated in order to establish what caused it. The spokesperson said,

As part of the ongoing randomized, controlled global trials of the Oxford coronavirus vaccine, our standard review process was triggered and we voluntarily paused vaccination to allow a review of safety data by an independent committee. Illnesses sometimes happen by chance during trials and must be reviewed independently.

According to the World Health Organisation (WHO), safety has to be paramount in vaccine clinical trials and temporary suspensions are not unusual in order to evaluate any unexplained illness in a participant.

Dr. KK Agarwal, President, Confederation of Medical Associations in Asia and Oceania (CMAAO) explained that the vaccine being developed by AstraZeneca and University of Oxford called AZD1222 uses a weakened version of a common cold causing adenovirus that has been engineered to code for the spike protein that the novel coronavirus uses to attach to the host cells and invade those. He said,

As of now, there is not much information on the nature and severity of the illness. But there are three possibilities that can be considered at this point. First, that the patient had some infection prior to getting the vaccine which got triggered later; second, that the patient got ill from something else during the trial period and third, that the patient got ill due to the adverse reaction of the vaccine candidate. In any case, the standard procedure calls for the trials to be halted for a period of time, decided by the internal committee of the company, in order to wait and observe similar conditions in the other participants. Halting the trials means stopping administration of the vaccine in anymore participants of the trials and does not include giving antibodies to those on whom the vaccines has been already administered.

Talking about the impact of halting the trials on vaccine development, Satyajit Rath, an immunologist and specialist in infections and diseases with the Indian Institute of Science Education and Research (IISER), Pune, said,

Not much, so far. The trial is paused till the supervisory monitoring group examines the event and decides whether it is related to the administration of the vaccine candidate, or not. If yes, then the vaccine candidate trials will be in substantial difficulty. If not, the trial will resume, with a delay of only a few days. Until we hear the decision, we cannot say anything with certainty. However, in trials involving thousands of volunteers, an occasional coincidental illness is not unlikely.

The scientist also added that because the phase 1 clinical trials of the vaccines involve far fewer numbers of volunteers than phase 3, there are more chances of adverse effects to show up in phase 3.

To conduct trials in India and manufacture AZD1222, which will be called ‘Covishield’ in the country, the Serum Institute of India (SII) had partnered with AstraZeneca. According to Adar C Poonawalla, CEO, the organisation is planning to manufacture at least one billion doses of Oxford Vaccine by December. SII is currently conducting clinical trials of the vaccine candidate after it was granted permission from the Drug Controller General of India (DCGI) for Phase 2 and 3 trials. Commenting on the temporary suspension of trials of the Oxford vaccine, SII initially said that its trials of AstraZeneca’s COVID-19 vaccine candidate in the country were ongoing and had not faced any issues. The organisation also said in a tweet shared via its official account,

We (Serum Institute of India) can’t comment on reports of AstraZeneca pausing the trials in the UK, other than that they have been paused for review and shall restart soon. The Indian trials are continuing and we have faced no issues at all.

We (Serum Institute of India) can't comment on reports of AstraZeneca pausing the trials in the UK, other than that they have been paused for review and shall restart soon. The Indian trials are continuing and we have faced no issues at all.#SII #COVID19 #Latestnews pic.twitter.com/HWPUrQydWc

However, the central drug regulator has issued notice to SII for not informing it about pharma giant AstraZeneca pausing the clinical trials of the Oxford vaccine candidate for COVID-19 in other countries and also for not submitting casualty analysis of the “reported serious adverse events”. In its response, SII has tweeted,

We (Serum Institute of India), were going by DCGI’s direction and were not instructed to pause the trials. If DCGI has any safety concerns, we will adhere to their instructions and abide by the standard protocols.

We (Serum Institute of India), were going by DCGI's direction and were not instructed to pause the trials. If DCGI has any safety concerns, we will adhere to their instructions and abide by the standard protocols. pic.twitter.com/u0yaGAU0Eo

Commenting on SII’s commitment of developing over a billion doses and the potential impact on it due to the temporary disruption that Oxford’s vaccine is facing, Mr. Rath said,

Well, SII has made a speculative commitment to AZT1222, by gearing up to manufacture it long before phase III trials are completed. They knew quite well that this is a speculative investment, since it may not succeed in phase III trials, not simply because of possible adverse effects, but also because of not working very well to protect. Regardless of whether they are ‘making’ it, it remains a candidate vaccine as yet, and therefore not approved for distribution, until phase III trial results are evaluated and regulatory approvals granted. So there is no real substance to any claim of their ‘launching it by December’, anyway!