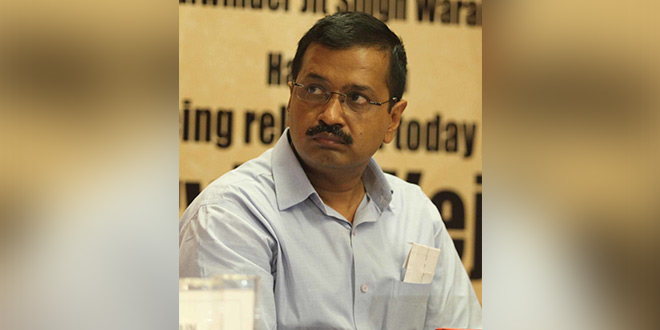 New Delhi: Chief Minister Arvind Kejriwal on January 3,  said he has tested positive for COVID-19 and isolated himself at home.The chief minister urged people who came in contact with him in the last few days to quarantine and get tested.

I have tested positive for Covid. Mild symptoms. Have isolated myself at home. Those who came in touch wid (with) me in last few days, kindly isolate urself (yourself) and get urself tested, Mr Kejriwal tweeted.

This comes after the minister on Sunday said though the capital is witnessing a sharp spike in the number of daily cases and active cases of coronavirus, there is no need to panic as most patients are asymptomatic or have very mild symptoms and do not need hospitalisation. He presented data to show that despite an increase in the number of COVID-19 cases, oxygen bed occupancy is less than one per cent in hospitals and is very low as compared to the deadly second wave of coronavirus in April last year.

Also Read: COVID-19: WHO Chief Scientist Calls For An Urgent Ramping Up Of Teleconsultation Services To Tackle The Third Wave In India

Currently, the number of active cases in the city is 6,360 and today (Sunday) 3,100 new cases are expected to be reported. All cases are mild and in most of them patients don’t need hospitalisation, the CM said in a virtual press conference. Active COVID-19 cases rose from about 2,000 on December 29, 2021 to 6,000 on January 1, but the number of patients in hospitals dipped during this period. On December 29, 2021 as many as 262 beds were occupied, while on January 1 it was only 247, he said.

According to the latest health bulletin, Mr Kejriwal said only 82 oxygen beds are occupied and 99.72 per cent are vacant.

There has been no major change in this number over the last three days which means no new patient required oxygen. If the need arises, the Delhi government is prepared with 37,000 such beds,  the chief minister said. On March 27 last year, Delhi had 6,600 active cases and 1,150 oxygen beds were occupied. As many as 145 patients were on ventilator support compared to five now,” he said.

Delhi would record around 10 deaths a day during that period. At present, the daily fatality count is zero or one, he said. The capital reported 2,716 cases on Saturday, the highest single-day rise since May 21, and the positivity rate mounted to 3.64 per cent.  On April 1, when the city last logged around 2,700 cases, around 1,700 oxygen beds were occupied and 231 patients were on ventilator support, he said.

I am presenting this data to show that the coronavirus cases at present are very mild and there is no need to panic. We have to act responsibly, wear masks, wash hands regularly and follow social distancing norms, Mr Kejriwal said.

On Saturday, Health Minister Satyendar Jain had said that hospital occupancy is still low and further restrictions will be reviewed soon.

While the emergence of the new Omicron variant has sparked fears of a third wave, there has been a constant surge in the COVID-19 tally in the national capital which recorded 7,865 cases in the last seven days. The positivity rate has risen to 3.64 per cent from 0.55 per cent on December 26.The city on Saturday recorded 351 cases of Omicron.

New Variant ‘IHU’ Identified In France, May Have 46 Mutations