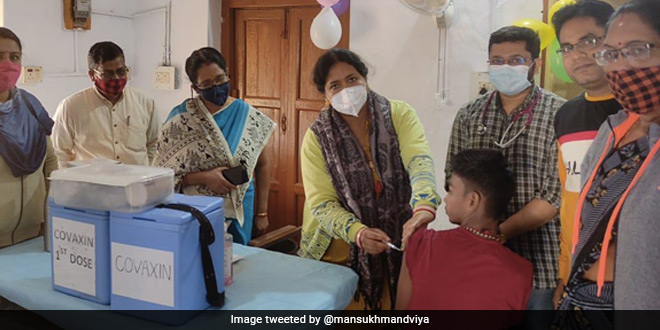 As the country witnesses a sharp surge in COVID-19 cases, fuelled by the new Omicron variant of coronavirus, the government begins vaccinating 15 to 18 year olds from today

New Delhi: India kickstarted the Covid vaccination drive for children aged between 15 and 18 years from today. Prime Minister Narendra Modi had announced that the authorities have given nod to vaccinate 15 to 18 years children against coronavirus during his address to the nation on December 25, 2021. He had also announced administering the ‘precautionary third dose’ to the healthcare workers, frontline workers, and citizens above 60 years with severe health conditions from January 10, 2022.

Some glimpses of the #COVID19 Vaccination drive for children in the 15-18 age group ????

I urge my young friends to get vaccinated at the earliest & further strengthen the world's largest vaccination drive.#SabkoVaccineMuftVaccine pic.twitter.com/jyBKWwcTkV

I urge my young friends to get vaccinated at the earliest and further strengthen the world’s largest vaccination drive.

Great to see that our young friends all over the country are uploading their pictures of getting vaccinated, inspiring people all over India ????

Union Health Secretary Rajesh Bhushan had informed the States, Union Territories that only ‘Covaxin’, indigenously-developed Bharat Biotech, is to be administered in the population in age group 15-18. He added that additional doses of ‘Covaxin’ will be sent to all States and UTs. The Drugs Controller General of India granted emergency use authorisation to indigenously-developed Bharat Biotech’s Covaxin for children above 12 years with certain conditions on December 24.

#IndiaFightsCorona
Only COVAXIN approved for less than 18 yrs.
18+ (i.e. born in 2004 or before)- are eligible for all vaccines,including COVISHIELD.
For 15-17 years (born in 2005, 2006, 2007) eligible only for COVAXIN.
Validations in place in Co-WIN @PMOIndia@mansukhmandviya

Potential beneficiaries began registering themselves on the Co-WIN portal from January 1, 2022, or they can also avail of a walk-in registration when vaccination commences from today. Those with the birth year of 2007 or before will be eligible for vaccination under this category, the Ministry of Health and Family Welfare (MoHFW) said. Dr R S Sharma, Cowin platform chief, had earlier said that besides Aadhaar and other national identity cards, children can use their class 10 ID card for registration. So far, over 12.3 lakh have registered themselves on the CoWIN portal.

According to MoHFW, all established protocols regarding vaccination are to be followed for the 15-18 years age group like beneficiaries are to wait for half-an-hour when they will be monitored for the adverse event following immunization (AEFI) and will be eligible for the second dose only after 28 days. States were informed that they have the option to designate some COVID Vaccination Centres (CVCs) as dedicated CVC for the 15-18 age group exclusively which can also be reflected on Co-WIN. Dedicated CVCs would ensure that there is no confusion in administering the vaccines. The States were requested to ensure separate queues for the 15-18 age group and separate vaccination teams.

The vaccination drive for youngsters in the 15-18 age group began in West Bengal at different government, semi-government and private schools, besides 338 hospitals and medical colleges across the states, and 37 health clinics of the Kolkata Municipal Corporation (KMC). The drive commenced in one school each in 479 blocks and civic bodies, the official said, adding that inoculation is underway in 16 educational institutions in the metropolis. A total of 48 lakh teenagers will be getting the vaccine, according to an official.

Puducherry Chief Minister N Rangasamy kickstarted vaccination of children in the age group of 15 to 18 years against coronavirus at a school. The initiative was started at the Thillayadi Valliammai Government High School in Kadirkamam. Vaccination would be done in all primary health centres and government hospitals. According to an official, the drive launched to cover students in the age group of 15 to 18 years aims at covering 83,000 people in the union territory.

According to Veena George, State Health Minister, 551 COVID vaccination centres designated for children in Kerala. She added that there are over 15 lakh children, who are eligible for COVID-19 jabs in the State. She further said that the State expects to finish vaccination of children in the next 10 days, adding that the Centre has provided 5 lakh vaccine doses last night and more than 1.40 lakh doses are expected today.

According to Madhya Pradesh Immunisation Officer Dr Santosh Shukla, there are 36 lakh registered school children in the 15-18 age group in the state. The state government plans to administer doses to 12 lakh children on Monday.

Chief Minister Bhupendra Patel launched the drive at a school in Koba area of the state capital Gandhinagar. The Gujarat state health department has set a target to cover 36 lakh teenagers in the age group 15-18 years in a special week-long statewide drive. A mega drive has been planned for January 7 with a focus on students of Class 10, as per the state health department. The Gujarat health department has prepared around 3,500 centres across the state for the special vaccination campaign, and the daily timings of the drive is 9 am to 6 pm. According to the health department, vaccination will be carried out in schools and Industrial Training Institutes (ITIs), and authorities will ensure that out-of-school children are also covered. In addition, the inoculation drive will also cover institutions for the disabled, orphanages and facilities for the care of mentally ill children.

The state of Tamil Nadu aims to fully vaccinate teenagers by January 31. According to state Health Minister Ma Subramanian said that there are 33.45 lakh children in the age group of 15 to 18 in Tamil Nadu.

In Uttar Pradesh as many as 1.4 crore children are eligible to receive the Covid jab and as many as 12,57,603 children in the 15-18 age group have registered so far on CoWIN platform to get vaccinated. According to CM Yogi Adityanath, vaccination for children has begun on 2,150 booths in the entire state.

In Maharashtra, the teenagers are being offered flowers, pens and masks after taking the jabs in Pune, while the Mumbai civic body has set up dedicated vaccination centres for the children in nine of its jumbo centres to ensure a speedy pace where a walk-in facility will be available. In Mumbai, a girl student was the first to receive the vaccine dose at a jumbo COVID-19 centre in the Bandra-Kurla Complex (BKC), where the drive was virtually launched by Maharashtra Tourism and Environment Minister Aaditya Thackeray.