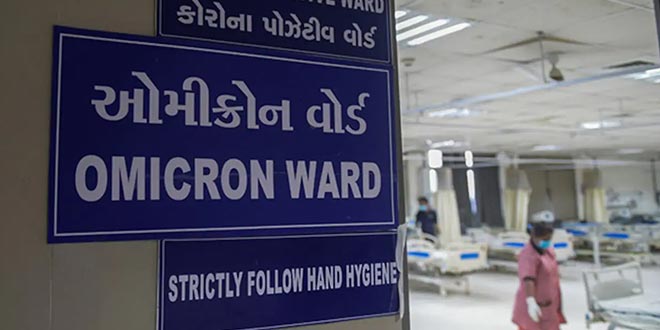 ‘The biggest challenge India will face amid the Omicron crisis will be the sudden need for medical care at home and Primary Health Care Centres,’ said WHO Chief Scientist Soumya Swaminathan on the rising Covid cases in the country

New Delhi: As the country faces a third wave of the COVID-19 pandemic, large cities like Mumbai, Delhi and Kolkata have reported a combined 75 per cent share of infections of Omicron, the highly transmissible coronavirus variant that was first detected in South Africa, according to the Ministry of Health and Family Welfare. NDTV spoke with WHO Chief Scientist Dr Soumya Swaminathan to learn about what India needs to do amid the surging cases.

Highlighting that the third wave will see the burden shift from hospitals to the out-patients department and from ICUs (Intensive Care Unit) to home-based care, Dr Swaminathan said that the biggest challenge that India will face will be the sudden need for medical care. She said,

Dr Swaminathan called for an urgent ramping up of teleconsultation services to tackle the Omicron-fuelled surge.

Maybe, this is the time to really scale up the telehealth and telemedicine services to make sure we have enough doctors and nurses in out-patients’ departments (OPDs); make sure we can treat people at home as much as possible or at primary care isolation centres where they get basic care if they do not need advance care. The whole burden of this outbreak will be more on out-patients and home-based services rather than ICU and hospital beds for severely ill, she said.

Dr Swaminathan also raised concerns about people becoming complacent. She asserted that people are thinking of the variant to be like a common cold and that there is nothing to worry about. She stressed on the dangers of complacency that stems from the general belief that Omicron infections are mild.

We have seen a lot of data coming in; mainly from South Africa and the United Kingdom. What South Africans have shown is that the surge, the number of cases they experienced with the Omicron compared to Delta and other surges was four times more. It is that much more transmissible. The actual number was 40,000 in the previous outbreaks during the peak and it was around 1,40,000 during Omicron. But at the same time, the risk of hospitalisation was one-fourth. So, it evens out – four times more transmissible, one-fourth the risk of hospitalisation, she said.

Dr Swaminathan added that once somebody is in the hospital for whatever reasons – because of comorbidity or they have to be observed – it has been found that the risk of becoming very severely ill, needing critical care and ventilation or in fact dying, was much less with Omicron compared to the other variants. But, the low risk of severe infections and deaths does not mean that the doctors, hospitals, out-patients departments, health care workers, and the infrastructure will not be overwhelmed, she stressed and recommended that governments must prepare for this.