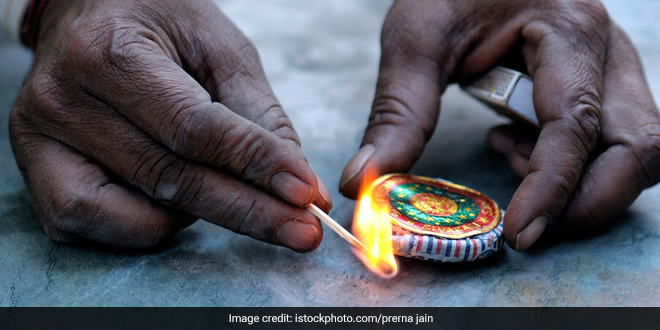 According to data from the Central Pollution Control Board (CPCB), Delhi recorded its poorest post-Diwali air quality in five years in November 2021

New Delhi: Episodic events such as firecracker bursting make the air worse for breathing, but there are other more significant sources for the deteriorating air quality all around the year, environmentalists said after the Delhi government announced a ban on the production, sale and use of all types of firecrackers in the city till January 1. Greenpeace India’s Avinash Chanchal said stricter regulatory action is required, along with better designed and implemented awareness campaigns, to enforce the existing plans and strengthen those.

There is no doubt that bursting of firecrackers makes the air worse for breathing and needs strict and urgent actions to reduce the prevailing air pollution levels. But there are other more significant sources such as pollution from transport, industries, construction and thermal power plants that are responsible for collectively deteriorating the air quality all around the year, Mr Chanchal told PTI.

The Delhi government had ordered a complete ban on the sale and bursting of firecrackers in the national capital from September 28 last year to January 1.

According to data from the Central Pollution Control Board (CPCB), Delhi recorded its poorest post-Diwali air quality in five years in November 2021, with a deadly cocktail of noxious fumes from firecrackers and stubble burning pushing the 24-hour average Air Quality Index (AQI) to the “severe” category (462). Residents had flouted the ban on firecrackers to celebrate Diwali and emissions from farm fires in the region had peaked at 36 per cent.

Environmentalist Bhavreen Kandhari said the ban on the production, sale and use of firecrackers should be in force throughout the year.

Why do they (Delhi government) implement such bans only for a certain period of time? There are no officials or volunteers who are ensuring that these plans are implemented on the ground. Those who had to get their stocks of firecrackers have got it by now and will eventually sell those at discounted prices to get rid of the stock. We do not need advertisements for this, we need boots on the ground, Ms Kandhari told PTI.

The Delhi Police had arrested 281 people — 138 for selling and supplying firecrackers and 143 for bursting those — during Diwali last year (September 29 to November 4). Firecrackers weighing a total of 19,702.489 kg were seized during the period.

Our festivals are a symbol of love and care for each other and other living creatures on this earth and bursting crackers does not fit well with the idea. So it is a good move that bursting firecrackers will not be allowed during the winters, which will help people breathe a bit easy during the festival days, Sunil Dahiya, an analyst at the Centre for Research on Energy and Clean Air (CREA), said.

He further said it is important to cut down on pollution from “continuous sources such as coal-based power plants” that have been granted “new extensions in compliance deadlines”.

This just shows that while on one hand small episodic pollution sources are being addressed, big institutional polluters are not being penalised but instead rewarded with relaxation in timelines for compliance. There should be strict action on them and all thermal power plants without flue gas desulfurisation (FGD) controls should be shut down in Delhi-NCR to reduce the pollution levels, Mr Dahiya told PTI.

Announcing the ban on firecrackers, Delhi Environment Minister Gopal Rai on Wednesday said an action plan will be drawn up with the city police, the Delhi Pollution Control Committee and the revenue department to ensure strict enforcement of the ban. He further said this time, there will also be a ban on the online sale and delivery of firecrackers in the city.

Last year, the Supreme Court had said there was no absolute ban on the use of firecrackers and only those fireworks that contained barium salts were prohibited. However, the apex court had also termed the rise in air pollution in Delhi-NCR an “emergency” situation and suggested clamping a lockdown in the national capital.

Delhi Government Extends Complete Ban On Sale, Use Of Firecrackers Till January 1