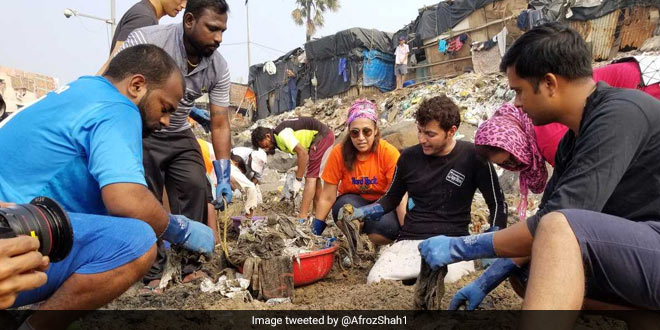 “The sea giveth and the sea taketh away,” – Anonymous

New Delhi: The saying that the sea gives what it takes away has gleefully been ignored by human beings for centuries as seas and oceans have been used as dumping grounds for all kinds of waste. A reversal of fortunes occurred on December 5, 2017 onwards, when Cyclone Ockhi hit the Mumbai coastline, depositing large amounts of garbage in the beaches of Versova, Dadar, Chowpatty, Nariman Point and a few others.

In Versova beach, where the weekly cleanup effort is led by Afroz Shah, Mr Shah and a group of volunteers have managed to clean the beach and remove a substantial portion of the garbage left behind by Cyclone Ockhi. A stretch of nearly half a kilometre in the Versova beach was the most affected one where a majority of the pileup of garbage post the cyclone had happened. A two-feet layer of garbage was formed and an estimated half-feet of the beach’s sand was taken away by the cyclone. Mr Shah estimates that nearly 50 per cent of the garbage from the beach has been cleared.

This is the problem of marine litter actually. We don’t know how litter comes to the sea and they can be from any part of the world. Plastic litter tends to move from sea to sea and during the cleanup, I found some garbage which had markings of Chinese manufacturers, which reaffirms the fact that some of this may not be local litter and has been carried by the tide from other seas, said Afroz Shah.

1. Cyclone Ockhi hits and we hit back .Wonderful cleanup with @MCGMswm.

2. Dialogue with law students on marine litter .They pledge ground action and partnership.

3. Ground action with coastal community to stop Marine litter problem. Shut the Tap is what we want. pic.twitter.com/sr0Rm22wWp

Mr Shah’s Versova beach cleanup entered its 112th week on December 9 and though Cyclone Ockhi’s garbage deposit posed a sudden and unexpected challenge for Mr Shah and his team, the beach cleanup crusader remained undaunted by it and is hopeful of removing the remaining trash deposited by the cyclone from Versova beach in the next two weeks.

Dadar beach experienced a similar situation post Cyclone Ockhi’s aftermath but a group of volunteers ensured that the beach was cleaned up duly in the aftermath of the cyclone. the volunteers led by Chinu Kawatra of Aarna foundation have been cleaning the beach regular for 16 weeks but they were in for a shock when they  find out that post cyclone Ockhi the beach was filled with a thick layer of garbage. not losing heart, the volunteers resumed their cleaning efforts and have removed 8 tonnes of garbage from the beach since then.

One big truck was filled with garbage and whatever we had cleaned for 15 weeks was nearly undone by the cyclone. But we gathered nearly 70 volunteers to ensure that the beach was back to its earlier clean state, and in the process, removed 8 tonnes of garbage, said Chinu Kawatra, Founder, Aarna Foundation.

Jay Shringarpure, another Dadar beach cleanup enthusiast teamed up with Dadar Women Network, a community network of women living around the Dadar area and cleared the beach of plastic waste that has deposited post the cyclone.

The BMC’s role during the beach cleanups in Mumbai post Cyclone Ockhi’s aftermath has been lauded by all the beach cleaners. Since December 7, the BMC has cleared a total of 110 tonnes of garbage within two and a half days. The plastic waste has been sent for recycling at various recycling plants in and around Mumbai. The BMC also worked in tandem with beach cleaners Afroz Shah, Chinu Kawatra and Jay Shringarpure and ensured that garbage was removed with due cooperation with these activists.

We cleared most of the garbage within two and a half days and the remaining will be cleared within a week. We are well prepared for any such emergency situation. We have increased the number of collection trucks and have doubled the numbers in Versova and Juhu from two and four respectively to four and eight. These trucks can take double or triple trips carrying the garbage from the beach, said Vijay Balamwar, Deputy Municipal Commissioner, Brihanmumbai Municipal Corporation.

Cyclone Ockhi’s garbage deposits on Mumbai’s beaches once again turns the focus on the crisis of marine litter and how our actions could come back to haunt us if not kept under check. But for the city which has always banked on its undaunted spirit to recover from tragedies before, Cyclone Ockhi proved to be no different. BMC, beach cleanup activists and volunteers got together to restore normalcy to Mumbai’s beaches, post the cyclone.