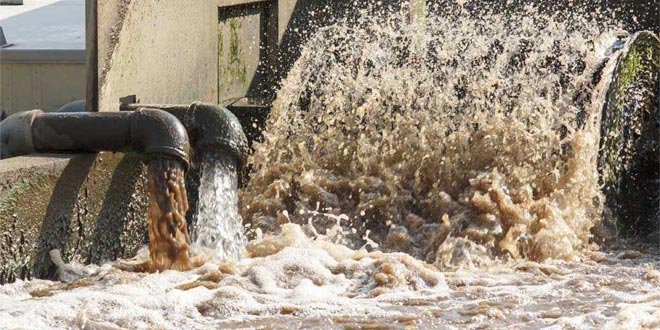 In November 2014, a month after the launch of the Union government’s ambitious sanitation programme Swachh Bharat Abhiyan, the then Union Minister of State for Environment, Forests and Climate Change Prakash Javadekar stated in a press conference that 70 per cent of India’s sewage treatment plants (STPs) are dysfunctional. For a country which is looking to revolutionise waste management and treat sewage before its disposal, the percentage of dysfunctional STPs, as stated by the minister was a high one. India’s history with STPs has not been very good, as ample instances of dysfunctional STPs have been brought to fore. From high maintenance costs to unavailability of land, plenty of problems have contributed to the sad state of STPs in India.

The 2014-15 report by the Central Pollution Control Board (CPCB) carried an examination of the present state of STPs in India. The report differs from Minister Javadekar’s statement, as it states, that out of India’s 816 STPs, 522 are operational and 79 are non-operational. 145 STPs were under construction in January 2015, while 70 new STPs were proposed. The report however, did not take into consideration the private STPs in India. 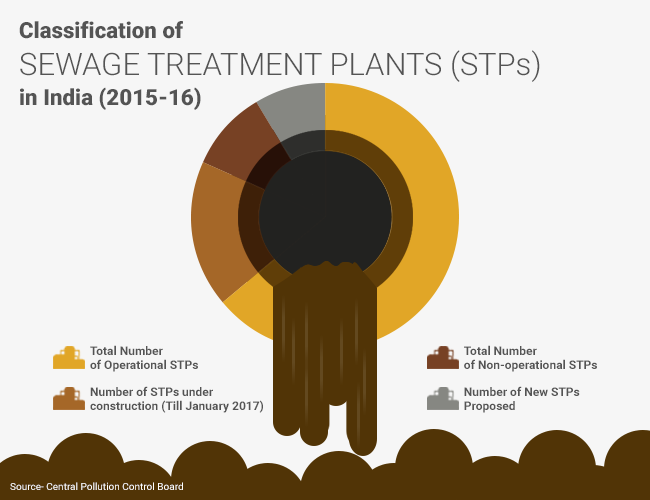 Though more than 500 STPs are operational in India, a majority of them do not meet their capacity of treating sewage. There are several problems as far as STPs are concerned, and unless the issues are addressed collectively, the gap between the amount of sewage generated and treated will keep increasing. The problem of costly maintenance of STPs is the most damaging as many STPs shutdown due to their inability to bear the functioning costs, said A.B. Akolkar, Member Secretary, Central Pollution Control Board.

Setting up a sewage treatment plant is a costly affair. The CPCB estimates that the conventional cost for an STP comes to Rs 1 crore per million litres daily (MLD). This means that an STP with the capacity of treating 300 mld of sewage will require Rs 300 crore to be set up. It must be noted that this is just the set up cost. Additional costs in installation of an STP include provisions of power supply, installation of power generators and employing staff. Apart from these, the maintenance of a medium sized STP (with a treatment capacity of minimum 100 mld) requires an amount between Rs 70 lakh to Rs 2 crore annually. STPs set up by both Union and state governments have to bear the brunt of these expenses, as churning out such large amount every year becomes difficult for state governments. It results in many STPs lowering down their sewage treatment capacity, to ultimately becoming dysfunctional due to unavailability of enough funds. 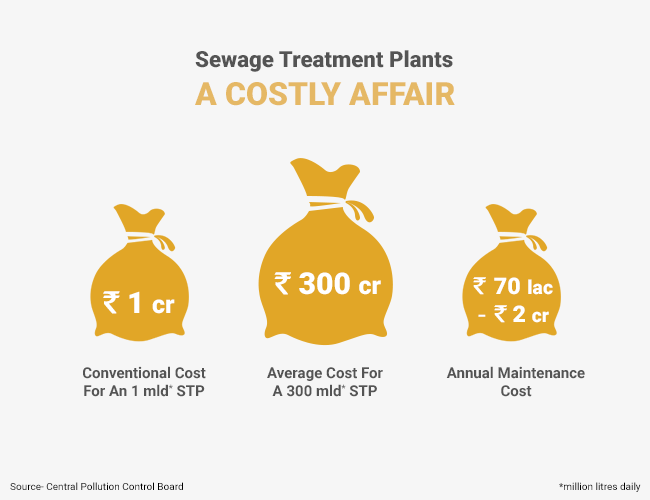 STPs are a costly affair

STPs are costly affairs, and can only be maintained when there is comprehensive financial structure for maintenance is available. An STP needs all its sections to be fully functional in order to treat sewage. This is only possible when every expense for power, staff etc. are met regularly. Otherwise, STPs will face regular closure, said Mr. Akolkar.

To address the problem of costs of setting up and maintaining STPs, the Union government has now taken certain steps to ensure that at least the new and upcoming STPs do not face financial crunch. To ensure this, the Union government is now encouraging the setting up of most STPs using the public-private partnership (PPP) model, so that the onus of bearing the cost is not just on the government. The Bhandewadi STP project in Nagpur completed in December 2016 was set up using a PPP model of investment. Recently, the Union Water Resources Minister Uma Bharti also stated that the Union government would bear the cost of maintenance for upcoming Ganga basin STPs for 15 years from the completion of the projects to ensure that they do not face shutdown crisis.

STPs require continuous power supply to function properly. Power supply remains a major hindrance for STPs as erratic power supplies affect the amount of sewage treated on a regular basis. STPs which have a treatment capacity of more than 200 mld require 1 megawatt of power supply. In India, where more than 50 million homes still have no access to electricity, continuously supplying 1 megawatt of power to STPs is a big task. When the CPCB surveyed 84 STPs in 2010, it found that only 8 of them had continuous power supply. The rest were dependent on power supply lasting for 12, 14 or 18 hours a day. Alternate sources of power supply were also not available in most STPs observed during that survey, as only 12 STPs had alternate sources like generators. STPs in Uttar Pradesh, Bihar and Delhi were the worst in terms of STPs with adequate power supply.

Irregular power supply causes severe damage to STPs as the mechanism of treating sewage is frequently interrupted. That results in inadequate treatment of sewage and affects the daily sewage to output ratio. More than 300 STPs were without continuous power supply in 2014, showing the state of STPs in India, said Dr. Rajeev Upadhyay, Member Secretary, Uttar Pradesh State Pollution Control Board.

Providing power is a huge challenge and to reduce the dependency on externally provided power, present STPs are being developed to ensure that they generate enough power from the treated sewage to sustain their functioning. The 190 crore STP project in Nagpur, which began functioning in December 2015 became India’s first STP to generate electricity from treated sewage. Bengaluru followed suit in May 2017 when the Koramangala-Challaghatta STP was inaugurated, which had a capacity of producing 1 MW of power using a biogas engine. From a financial point of view, STPs generating power from sewage stand to gain as they can sell the electricity to respective state governments and earn enough to cover maintenance costs of STPs.

The STP in Yamuna Vihar has been instrumental in saving nearly Rs 1.5 crore annually for the Delhi Jal Board. We no longer need to purchase electricity from the electricity board. The STP produces nearly 18 lakh units of electricity every year, so we have significantly been able to cut down on electricity expenditure, said a Delhi Jal Board official.

Outdated Infrastructure And Lack of Knowledge

The 2015-16 CPCB report estimated that even among functional STPs, nearly 50 per cent of them had outdated infrastructure. 4 STPs in Kanpur were revealed to be using old machinery that is decades old to treat sewage, and expectedly the treated sewage did not differ much in terms of pollutants. STPs installed in Uttar Pradesh, Bihar, Delhi and West Bengal, before 2000 were revealed to be in pathetic conditions as the infrastructure was dated and not fit for usage. Some of the common problems which were visible in 10-15 year old STPs were the undersized balancing tanks, dated clarifiers which resulted in insufficient aeration and inflow of more sewage than the STP could handle. These significant problems often result in closure of STPs.

An additional problem noted by waste management experts is how STPs in India are understaffed and employ people lacking in necessary skills of sewage management and treatment. This is often attributed to agencies which take over the responsibilities of operation and management of STPs. Most of these agencies hire people who have no prior experience of working towards the management of STPs and lack the necessary skills and training required to handle STP related problems. The reluctance of state governments to pour in more funds in the maintenance of STPs plays a big role in agencies given contracts to maintain them. Most of these are dependent on charges levied by the maintenance agencies on residents associations or industries. The fee collected from these is never enough to pay skilled STP workers, as a result of which lowly skilled workers are hired and add to the problems of an ill-functioning STP.

Like any industry, STPs should also be treated in a systematic manner, with upgradation of infrastructure from time to time and employment of skilled people. Unfortunately, STPs in India mostly see employment of unskilled people who have no experience in the field of sewage management or treatment. In a bid to save money, O&M (?) agencies in charge of STPs avoid upgradation, resulting in an STP becoming dysfunctional within a very short time, said Prof. Shyam R. Asolekar, Centre for Environmental Science and Engineering, Indian Institute of Technology, Bombay.

A Brighter Future For STPs?

In the past 3 years, the proposed construction of more than 100 STPs shows that the Union government’s interests do not lie only in eradicating open defecation, but also in addressing the plaguing issues of sewage treatment. The proposed new STPs are being touted as more modern in their choice of equipment, ensuring supply of energy which is derived from biogas or methane and already having a structured financial model based on which the treatment operations would commence and continue smoothly. Reducing the financial burden on a single entity has been the common approach as far as construction of STPs in the last 5 to 6 years is concerned.

Problems of acquiring land, especially for Union government approved projects, as well as directing flow of sewage directly to STPs still remain a concern. For civic bodies, directing sewage flow to STPs is a major challenge, especially in urban spaces where drainage plans are decades old. Despite these issues, the construction of STPs has been an objective under several of the government’s programmes such as Swachh Bharat Abhiyan, Namami Gange and Atal Mission for Rejuvenation and Urban Transformation (AMRUT). It can be hoped that STPs will be handled more efficiently and scientifically, as the next few years will see the installation of numerous STPs and their dysfunctionality will only accelerate the dire state of existing sewage treatment scenario in India.

Funding Swachh Bharat Abhiyan: Banks and Micro-Finance Institutions Have A Crucial Role To Play In Supporting Rural Sanitation In India