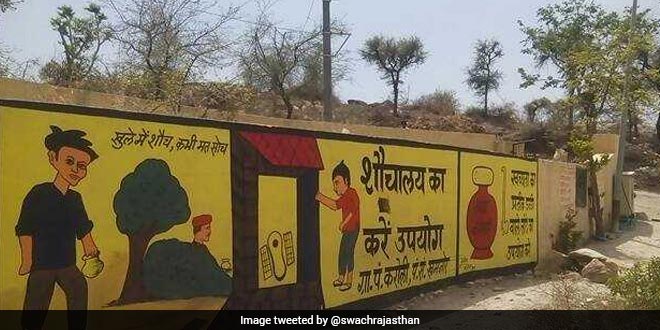 The Swachh Bharat Abhiyan’s is at a halfway mark from its 2019 deadline to eradicate the practice of open defecation. Nearly three years into the sanitation programme, many villages, towns and cities have been declared open defecation free (ODF). Eradication of open defecation from cities is a huge challenge for urban local bodies (ULBs)/municipal corporations as rising populations across urban spaces is making it difficult for ULBs to construct individual household toilets (IHHLs) and public sanitation complexes. Udaipur in Rajasthan has braved such odds to successfully build household and public toilets to eradicate the practice of open defecation from the city and earn the ODF city tag.

The announcement of Udaipur going ODF was made on August 2, 2017, which was followed by a set of tweets lauding the achievement. Udaipur ranked a low 310 out of 434 cities surveyed in this year’s Swachh Survekshan, but the city’s civic body’s determination to provide better sanitation facilities remained undeterred. Since May 2015, the civic body has been working towards eradicating open defecation from all of the city’s 55 wards. By May 2017, 42 wards were completely ODF. Within another two months, the municipal corporation was successful in making the rest of the 13 wards ODF, which eventually resulted in the city becoming ODF.

#Udaipur is #Rajasthan's first municipal corporation to be awarded for being an #ODF city#merabharatODF#SwachhRajasthan #SwachhBharat pic.twitter.com/JPESss82MK

We have been working towards eradicating open defecation from the city for the past two years. We have focused both on building of individual household latrines as well as building new public toilets and renovating the old ones, said Sidhharth Sihag, Commissioner, Udaipur Municipal Corporation.

As per the 2015 report titled City Sanitation Plan, Udaipur, prepared by Infratech Service Pvt. Ltd. and submitted to the civic body – Udaipur, the city had a shortage of 5,493 IHHLs. More than 28,000 of the city’s population did not have access to toilets and defecated in the open. In the two years since 2015, the civic body has constructed 5,500 IHHLs, thereby ensuring that all households in the city have access to toilets.

Lack of public toilets was an even bigger matter of concern for the municipal corporation. The city had only 45 public toilet complexes till 2015 and 317 public urinals. The condition of the public toilets was poor, with 39 of the 45 public toilets not having a sewer connection and 28 of these were without water supply. Most urinals lacked electricity and had no regular water supply or cleaning mechanism. Since 2015, the civic body has built 45 more public toilets and renovated the existing ones, taking the total to 90. Preference has been given to low income and slum areas to ensure that the absence of sanitation facilities in such areas were adequately addressed. The existing toilets were provided with water taps and electricity supply to ensure their cleanliness.

Apart from building new toilets in the past two years, we have also renovated the ones which were in highly poor condition. Lack of water and electricity makes a toilet practically useless, resulting in no one using it. To make the city ODF, we had to renovate our existing toilets as well, said Mr Sihag.

Udaipur’s status as an ODF city is an important benchmark for the state which has topped the table in terms of toilet construction, though the dream of ODF state still remains distant. 5,080 gram panchayats in the state have been declared ODF and 7 cities have achieved the recognition. Despite constructing over 54 lakh toilets since the beginning of Swachh Bharat Abhiyan, the state’s sanitation coverage is 78 per cent. Udaipur will be a good example for other municipal corporations to focus equally on the building of IHHLs, as well as public sanitation complexes, as the onus of eradicating open defecation lies on striking the right balance between both these models.