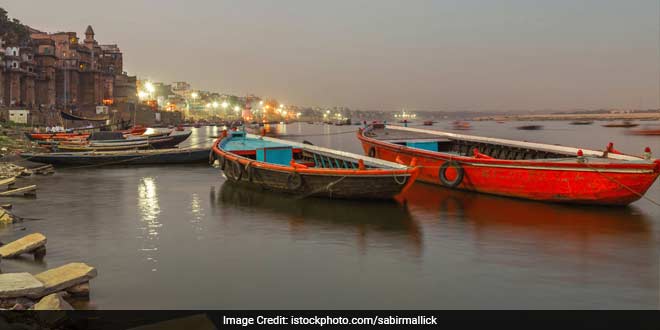 New Delhi: All 4,480 villages on the banks of Ganga River have been declared open defecation free (ODF) under ‘Namami Gange‘ initiative, Union Minister Narendra Singh Tomar said today. The announcement was made at the ‘Ganga Gram Sammelan’ held at Allahabad in Uttar Pradesh. Union Water Resources Minister Uma Bharati and Uttar Pradesh Chief Minister Yogi Adityanath were also present at the event.
The 4,480 ODF villages are in the five states of Uttarakhand, Uttar Pradesh, Bihar, Jharkhand and West Bengal. Mr Tomar also launched a model Ganga Gram initiative under which 24 Namami Gange villages have been identified in the first phase, Department of Drinking Water and Sanitation said in an official statement. Out of these 24 villages — three are in Uttarakhand, ten
in Uttar Pradesh, four in Bihar, five in Jharkhand and two in West Bengal.
In Pictures: The Mighty River Of India, Ganga Is Dying And We Are To Be Blamed
Ganga Gram is a joint initiative of Ministry of Drinking Water and Sanitation and the Ministry of Water Resources. Under this programme, gram pradhans of the 24 villages were administered oath for achieving the goal of ‘Adarsh Ganga Gram’. The initiative focuses on better cleanliness and
infrastructure facilities like solid and liquid waste management, rejuvenation of ponds and water sources, water conservation projects, organic farming and convergence with other government departments and projects, the statement said.
Speaking on the occasion, Chief Minister Adityanath stressed on his government’s commitment to make the entire state of Uttar Pradesh ODF by December 2018.
Also Read: What Namami Gange Can Do That Earlier Ganga Clean-Up Plans Couldn’t
Related Topics:
Bihar Ganga Jharkhand Open Defecation Free Uttar Pradesh Uttarakhand West Bengal
Up Next