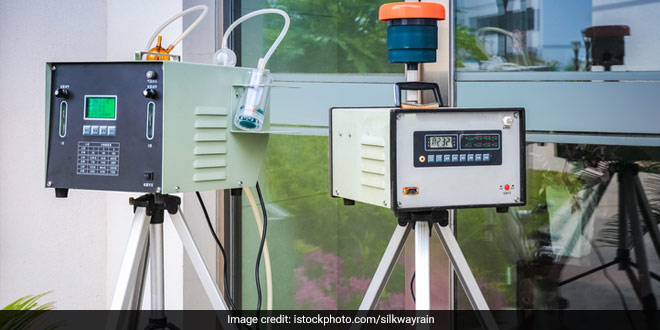 New Delhi: “Air quality monitoring facility is still limited in India. The satellite data as well as the existing monitoring data suggests that other cities which are not being monitored right now, would fall in the critically polluted category, having air pollution beyond the permissible limits, especially across Delhi, Uttar Pradesh and Bihar,” Clean air campaigner and former Greenpeace India Associate Sunil Dahiya told NDTV when asked about the current situation of air quality monitoring in India.

Air quality monitoring aids in assessing the pollution levels against the ambient air quality standards. Vigorous monitoring helps in alerting people and initiating actions in case of extreme pollution. Monitoring air quality is also significant as the policy makers can accordingly frame policies and strategies to curb air pollution and for the environment experts to understand the impact of policy changes.

In India, the air quality is being monitored Central Pollution Control Board (CPCB), state pollution control boards, Pollution control committees, and National Environmental Engineering Research Institute (NEERI) in cities. As of January 2019, the network consists of 731 operating stations, covering 312 cities/towns in 29 states and 6 Union Territories of the country as compared to 342 operating stations in 127 cities/towns across the 26 states and 4 Union Territories of the country in 2016.

These monitoring stations are aligned with World Health Organisation standards and norms and verified by CPCB. CPCB, under the Air (Prevention and Control of Pollution) Act, 1981, has also set National Ambient Air Quality Standards (NAAQS), the standards for ambient air quality, which refers to the condition or quality of air surrounding us in the outdoors.

Mr. Vivek insists that at present, the air quality monitoring in India is not as comprehensive mainly because India is monitoring approximately 300 out of the total 5000 cities and towns.

The air quality monitoring coverage in our country is very weak as compared to that of European Union or China, which have about a hundred stations per city. Even in these 300 cities, we need to touch more areas and increase the monitoring stations.

Mr. Vivek also explains that the recent government effort to curb the air pollution, National Clean Air Programme, will certainly help in coverage but the protocols for air quality monitoring have to be set accurately to ensure the quality of the data being recorded.

Lastly, Mr. Vivek strongly feels that setting up ground based monitors is always going to be a challenge in India considering the huge area that is to be covered. But the authorities monitoring the air quality as well as the policy makers need to utilise the satellite based air quality data, especially in rural and peripheral areas.

Greenpeace India’s annual study on particle pollution, Airpocalypse III suggests numerous challenges in the government data on air quality due to various factors, but mainly because the majority of the measurements are taken manually, raising questions about the quality of the data.

Mr. Vivek also agrees with the same and told us,

Right now, manual reporting or lab based air quality analysis is what is mostly followed in India, more than often this data can be inaccurate since it can be disturbed by factors like sample loss, data malfunction, power cuts or even if it’s not analysed properly.

Another factor according to Greenpeace India is the location of monitoring stations and data collection from them in the case of remote areas as these stations often become dysfunctional for long periods of time resulting in inaccurate average values.

Geographies like Korba in Chhattisgarh, Cuddalore in Tamil Nadu and Nanded in Maharashtra show PM levels below NAAQS possibly because of such factors. Although the data is definitely sufficient to prove that air quality is poor across the country in almost monitoring, it will be necessary to use satellite data to complement and validate ground measurements; and to establish an independent regulator to ascertain data quality and to standardise the reading across the country.

Sources Of Pollution And Types of Pollutants In India

In India, a total of 12 pollutants are monitored, including Sulphur dioxide (SO2), Nitrogen dioxide (NO2), PM10, PM2.5 (particulate matter of up to 10 micron and 2.5 micron in size), ozone, lead, arsenic, nickel, Carbon mono oxide (CO), Ammonia (NH3), benzene, and BaP (particulate phase).

However, Vivek Chattopadhyay from Centre for Science and Environment tells NDTV that in most of the cities, only SO2, NO2 and RSPM / PM10 are monitored regularly. Other pollutants, such as PM2.5, O3, CO, BTX, heavy metals are being monitored only in selected cities due to less monitoring capacity.