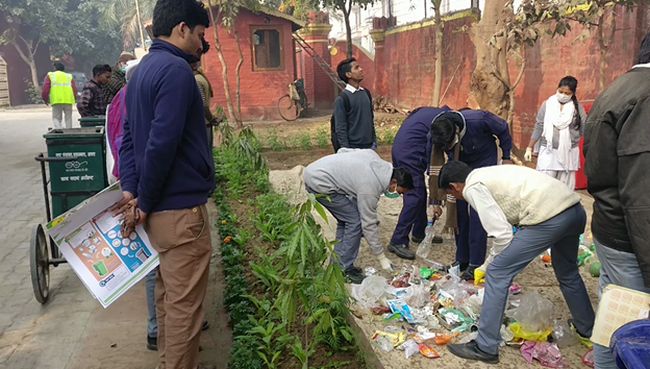 New Delhi:  The Delhi High Court today expressed displeasure over municipal workers failing to ensure proper garbage disposal in the national capital, saying there was an “unholy nexus” between people disbursing salaries and the cleaning staff.  The court was referring to complaints received by it that some cleaning staff do not show up for work, but get their attendance marked by those in in-charge by paying them a portion of their salary. This “unholy nexus” or arrangement is between the people deputed for garbage disposal and those in-charge of disbursing their salary, as per the complaint.

“There seems to be an unholy nexus between people disbursing salary and those deputed to collect and dispose of garbage. This is also with regard to all municipal functions. People are marking attendance and not showing up at work against part of their salary,” a bench of Acting Chief Justice Gita Mittal and Justice C Hari Shankar observed.

The observation came during the hearing of two PILs seeking directions to the three municipal corporations of Delhi (MCDs) to prevent spread of vector-borne diseases like dengue and chikungunya.

The bench further noted that this “nexus” was not confined only to garbage disposal but had extended to other municipal functions as well. It asked the corporations how this was possible when now everyone was supposed to have a bank account. It also asked the MCDs how its contractors pay the people who are deputed for garbage disposal.

“Now everyone is supposed to have bank accounts. We do not understand why people are not paid their complete salaries. How are the salaries paid,” it asked, to which the corporations said their employees’ salary is deposited directly into their accounts.

The lawyers appearing for the MCDs, however, said they had no information regarding how contractors’ employees were paid.

From Delhi High Court To Urban Development Ministry, The National Capital’s Garbage And Sanitation Crisis Is Receiving Much Needed Attention