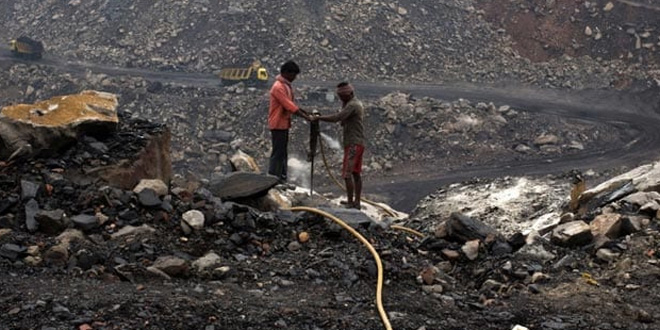 At COP26, India promised to meet 50 per cent of its energy needs from renewables

New Delhi: Prime Minister Narendra Modi, in his speech at the ongoing 26th United Nations Framework Convention on Climate Change’s Conference of Parties known as COP26 in Glasgow, laid out India’s climate change action plans to take forward what was agreed in the Paris Agreement to address climate change at a faster pace. In India and in many other parts of the world, the impact of climate change is already visible in the form of extreme weather events like record-high levels of rainfall, floods, forest fires, landslides, droughts, cyclones, among others. Here are the highlights of the climate action plan announced by PM Modi during the ongoing climate summit in UK:

Where Does India Stand As A Polluter?

If European Union (with 28 members) is considered, which is producing 9.02 per cent of global emissions, then India is the fourth largest GHG emitter. 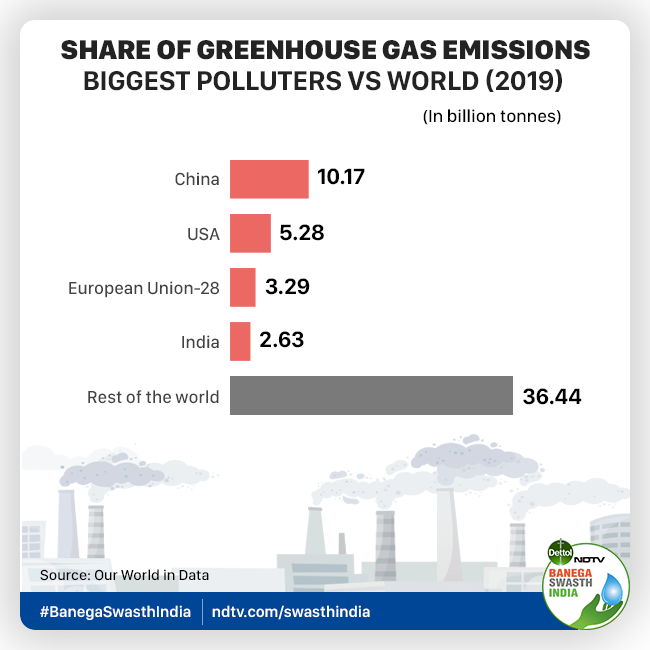 China, USA, EU and India are the top contributors of greenhouse gas emissions in the world 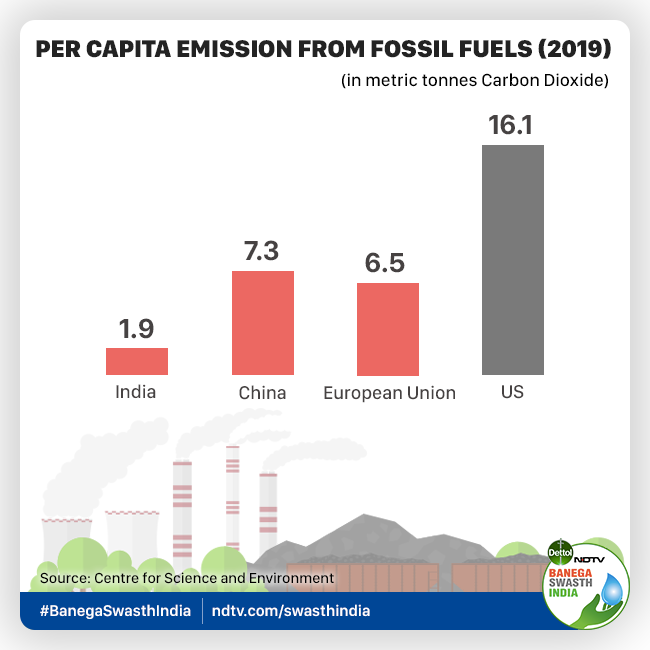 Per capital emissions from fossil fuels is highest in the USA

The climate targets that India has announced at the global level can be broadly divided into the pre-2020 targets and the promises made in Nationally Determined Contributions (NDCs) under the Paris Agreement (COP21).

Happy to inform that India has practically achieved its Pre-2020 #ClimateAction targets. Although India is not responsible for historical emissions, India, under the dynamic leadership of PM @narendramodi ji, is leading the world on #ClimateAction @moefcc pic.twitter.com/05JN8e5Jla

NDCs Under The Paris Agreement

The 2015 NDC of India comprised the following eight goals out of which three have quantitative targets for a ten-year time frame:

According to MoEFCC, India is on track to exceed the 2030 targets for two of the quantitative targets- reduction of emission intensity and share of non-fossil fuel-based electricity generating capacity.

The country has already achieved a reduction in the emission intensity to GDP by 25 per cent by 2016 below 2005 levels, as per the Centre for Science and Environment (CSE). 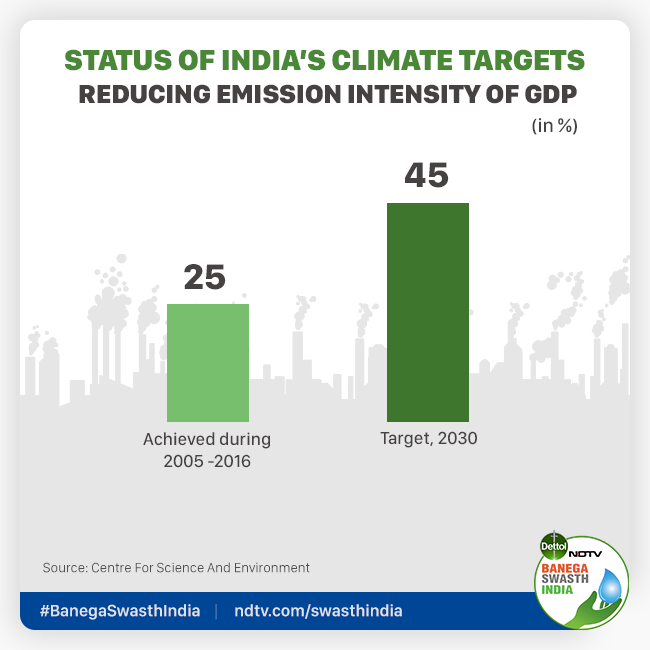 According to the Ministry of Power, by July 2021, the non-fossil fuel sources in India accounted for 38.5 per cent of generating capacity and is expected to achieve the 40 per cent target by 2023. India has installed capacity of over 101 gigawatt of renewable energy as of November 2021 and the target is to install 500 gigawatt by 2030. 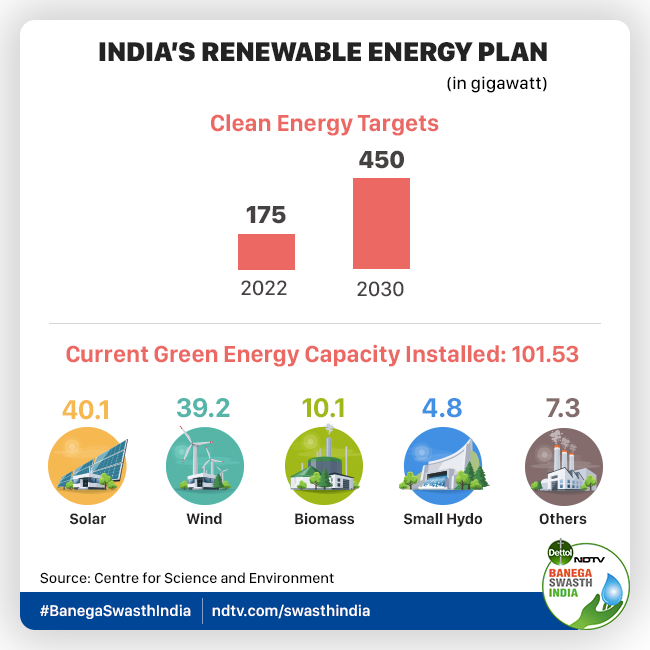 India aims to install 500 gigawatt of renewable energy by 2030

However, the status of the third quantitative target of creating an additional carbon sink, which refers to a natural body like forests that absorb carbon dioxide from the atmosphere, is concerning, says D. Raghunandan, Scientist and a member of Delhi Science Forum. It is because of the slow progress afforestation efforts and large-scale deforestation, he said. According to an estimate done by Global Forest Watch, a collaboration between the University of Maryland, Google, the United States Geological Survey and National Aeronautics and Space Administration (NASA), India lost 18 per cent of its primary forests and 5 per cent of its tree cover between 2001 and 2020.

While talking to NDTV about the rising global temperature and India’s climate promises, Chandra Bhushan, CEO of the International Forum for Environment, Sustainability and Technology (iFOREST) said,

Global mean surface temperatures reached 1.2 degree Celsius above the pre-industrial average in 2020, and the warning is that Earth could hit 1.5 degree Celsius in as little as a decade. The 0.3 degree Celsius separating these two temperatures make a world of difference. Scientists believe that stabilising the world’s temperature rise at 1.5 degree Celsius could help avoid serious effects of climate change. Hence fossil fuels such coal, oil needs to be ditched. But for a growing country like India that has an ever-increasing energy requirement cannot give up coal all of a sudden. It will continue to dig coal which can be problematic in the long run.

Mr Raghunandan added that India should now focus on covering more areas like seas-level rise, increasing public transportation, increase forest cover and others within the targets that India has set. The experts recommended that shifting away from coal by retiring the inefficient coal plants and not building new one is the first and a very important step towards putting India’s global climate target compatible to 1.5 degree Celsius temperature rise.

COP26: What Is Climate Finance And Why Is It Important For Reducing Emissions