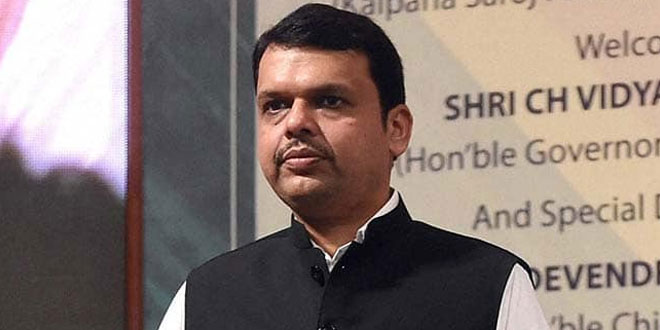 Mumbai: Under fire for waterlogging in Mumbai following a heavy downpour, Maharashtra Chief Minister Devendra Fadnavis said on Tuesday that he would ask the civic body to frame a “time-bound” policy for cleaning of nullahs (drains). Speaking in the state Assembly, he, however, blamed encroachment along and over the channels and rivers which carry floodwaters out to the sea. Earlier, opposition leaders including NCP’s (Nationalist Congress Party) Ajit Pawarand Jayant Patil took the government to task over deaths due to rain-related incidents and rail and road traffic in the city coming to a halt on Monday and Tuesday. CM Fadnavis said,

I will ask the BMC (Brihanmumbai Municipal Corporation) to come out with a time-bound policy for cleaning and maintenance of nullas. There are two major issues – encroachment over nullas and growth of mangroves at the mouth of nullas where they enter the sea, which obstructs a smooth flow of water. I have seen several times that MLAs approach me requesting to go slow on anti-encroachment drive. Those who live in such unauthorized structures are also facing threat to their life. Mouths of nullas are covered with mangroves, and if we open them up, it will ensure a smooth flow of water into the sea. We can work out some solution for it.

Several small rivers in Mumbai have been encroached upon, he said, adding that the state-run Mumbai Metropolitan Region Development Authority (MMRDA) has removed encroachments in several areas while the BMC is in the final stages of clearing the channels.

Defending the BMC, the chief minister said the nullahs which carry off floodwaters can handle a maximum rainfall of 150 mm in 24 hours. If the rainfall is more severe, it puts pressure on the transport infrastructure.

Speaking about the Brihanmumbai Stormwater Disposal System (BRIMSTOWAD), a project for overhauling Mumbai’s drainage network, CM Fadnavis said, “Out of seven pumps (that are planned), five have been installed. One pump is being set up in Mahul while the location for the other is being finalised. The sites fall under CRZ (Coastal Regulation Zone) and CRZ should make an exception when it comes to such projects.”

He further said, “We have acquired salt pan land…for setting up pumps under BRIMSTOWAD.” Speaking in the Legislative Council, CM Fadnavis said the pumps deployed under BRIMSTOWAD to remove water from railway tracks and low-lying areas “release the water into the sea with greater force than that of the tide”. “Whenever there is heavy rainfall in Mumbai, the volume of water pumped out off the roads is more than the storage capacity of Bhatsa and Tansa lakes together,” he said. But the rainfall in the last four days crossed the average rainfall for entire June, he pointed out.

Related Topics:
Cleanliness Maharashtra
Up Next