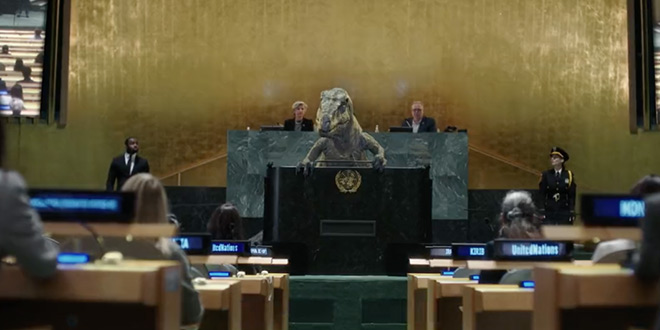 New Delhi: It is time to act and act now when it comes to climate crisis. And to drive home the urgency and get the world’s attention it is time to do whatever it takes. Even if it means getting an extinct specie to knock some sense into us, humans! The viral video that is currently grabbing eyeballs, shows a dinosaur, who means business walk into the iconic 193-member General Assembly Hall at UN Headquarters in New York, to firmly pass on a simple message to the august gathering of world leaders and diplomats, “It’s now or never. Don’t choose extinction and save the human species, before it’s too late.”

The creative video was released by the UN Development Programme, as the centerpiece of the agency’s ‘Don’t Choose Extinction’ campaign. In the video, a dinosaur named Frankie makes a majestic entry, takes the dais and cuts to the point:

Listen up, people. I know a thing or two about extinction. And let me tell you, and you’d kind of think this would be obvious, going extinct is a bad thing. And driving yourselves extinct? In 70 million years, that’s the most ridiculous thing, I’ve ever heard!

Highlighting the key message that government backed fossil fuel subsidies must be cut in order to reduce greenhouse emissions and save the planet, the dinosaur sarcastically remarks,

At least we had an asteroid. What’s your excuse? You’re headed for a climate disaster. And yet every year governments spend hundreds of billions of public funds on fossil fuel subsidies.

He says, “Imagine if we had spent hundreds of billions per year subsidising giant meteorites. That’s what you’re doing right now.”

Doing away with fossil fuels in favour of renewable energy, to drastically cut emissions will also be a key topic at the upcoming COP26, 2021 United Nations Climate Change Conference being held in the United Kingdom from October 31 to November 12.

According to the UNDP research released as part of the campaign, the world spends $423 billion annually just to subsidize fossil fuels, enough to cover a COVID-19 vaccination for every person in the world or three times the annual amount needed to eradicate global extreme poverty.

Think of all the other things you could do with that money. Around the world people are living in poverty. Don’t you think that helping them would make more sense than paying for the demise of your entire species? Frankie, the dinosaur tries to reason in the video.

We can’t ignore #ClimateChange any longer. Unless we end the excuses, we’ll be another species facing extinction.

Join us and @FrankieTheDino, and let's take #ClimateAction before it’s too late: https://t.co/vf7PQ2oLeR#DontChooseExtinction #COP26 pic.twitter.com/lwAXw4FCYI

The video also highlights the opportunity that the COVID-19 pandemic has given the world to make significant changes. “You’ve got a huge opportunity right now, as you rebuild your economies and bounce back from this pandemic. This is humanity’s big chance,” Frankie urged, before ending with the key message for the world and its inhabitants,

Don’t choose extinction. Save your species before it’s too late. It’s time for you humans to stop making excuses and start making changes.