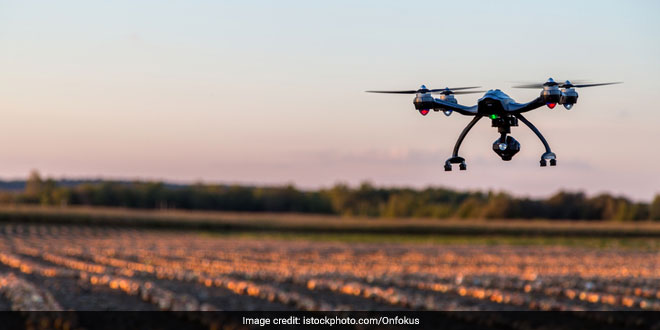 New Delhi: “Is it a bird, a toy or a plane?” wondered 41-year old Sudhakar Palli as he was relieving himself near the water reservoir of Lower Manair Dam (LMD) a week back. Finishing his daily ritual, as he was returning home two officers from Karimnagar Police station in Telangana confronted and showed him a picture captured on that roving device. Sudhakar was one among many residents from the town to have been encountered by the police department. The image was taken under an initiative started by the police department to end the practice of open defecation.

The local reservoir which is located on the outskirts of the town serves as a drinking water source for many residents and it also happens to be a popular tourist spot. Initially the drone was deployed to protect the water body from getting polluted and to prevent eve-teasing and illegal transportation cases. But after a few morning walkers highlighted the increasing cases of open defecation, the police department decided to utilise the drones to identify people and discourage them from the unsanitary practice.

After receiving suggestions from the Karimnagar Walkers’ Association, we started to also track people who would come out and relieve themselves. And in less than a week, the practice has considerably come down, VB Kamalasan Reddy, Commissioner, Karimnagar Police Department tells NDTV.

Talking about the action taken against those who defecated near the reservoir, the commissioner further adds, “For the first few days we would garland them in public and make them realise the health risks water pollution causes. They felt embarrassed and started using toilets.” When the police team inquired about the toilet access to these residents, ironically most of them already had a toilet at home and the ones who don’t have individual latrines, had access to community toilets.

Though open defecation has almost ended in the area, the drone will still carry out rounds once a day. Besides the open defecation instances, a number of people often dirty the area. For instance the pig-rearers rest near the banks of the reservoir while the pigs cause a menace near the waters. Often students from nearby college also wander around the place and make it dirty. The drone will also keep an eye out for such instances, said the commissioner.

This isn’t the first instance when open defecation instances have been curbed by the drones without having any human intervention. Kanpur was the first district in Uttar Pradesh who used drones after numerous cases of open defecation in the field were reported last year. The instances reportedly came down after three strict penalties were issued against the violators.

Despite acquiring the status of open defecation free (ODF), people in Sirsa and Panchkula districts of Haryana still preferred to defecate in open. It was then the administrative bodies of both the districts used drones to completely terminate the practice. The drones were deployed between 5 am and 9 am over the fields and those who were caught were dealt with a sternly.

On October 2, 2014, the centre had launched a nationwide Swachh Bharat Abhiyan with an aim to make the country open defecation free by 2019. So far seven states (Haryana, Uttarakhand, Himachal Pradesh, Kerala, Sikkim, Gujarat and Maharashtra), 1012 cities and more than 2,70,000 villages have been declared free from open defecation.