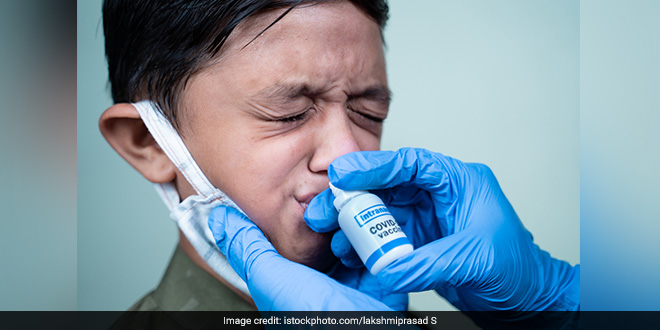 The scientists said that a nasal, non-invasive and cheaper alternative to injectable vaccines could be just what is needed in a world battling the COVID wave

New Delhi: Holding out the promise of preventing even mild infections and blocking transmission, mucosal vaccines may well be a game changer for the Covid pandemic, say scientists as Indians gear up for the world’s first intranasal preventive. A nasal, non-invasive and cheaper alternative to injectable vaccines could be just what is needed in a world battling a waning and waxing Covid wave with new variants throwing up challenges at every step, the experts said.

Earlier this month, Bharat Biotech announced that its iNCOVACC (BBV154),the world’s first intranasal COVID-19 vaccine, has received approval from the Drugs Controller General of India for restricted use in emergencies for those 18 and older. The vaccine is yet to be marketed.

By prompting an immune response where the virus first enters the body, researchers believe mucosal vaccines may prevent even mild cases of illness and block transmission to other people, something current COVID-19 shots are unable to do.

This pandemic has been dragging on because new variants continue to emerge that are capable of causing a lot of infections and transmission among people who were already vaccinated. A nasal vaccine may be what we need to finally break the cycle of transmission, said David T. Curiel, a professor at Washington University.

Immunologist Vineeta Bal agreed, explaining that intranasal vaccines are supposed to produce antibodies locally, i.e. in the upper respiratory passage, the entry point for SARS-CoV2. Because of their presence, the virus is supposed to be ‘neutralised’ immediately after entry without letting it gain foothold by entry in the cells and reproducing.

This means early clearance of the virus from the body before its spread to lungs and other organs is a distinct possibility and an advantage over other intramuscular injectable vaccines. Because the infection is ‘nipped in the bud’ so to say, viral replication inside the host body is less, Ms. Bal, from Pune’s Indian Institute of Science Education and Research (IISER), said.

India is not the only country to have approved a mucosal COVID-19 vaccine. China did too. However, while China’s mucosal vaccine is inhaled through the nose and mouth, India’s intranasal coronavirus vaccine is administered as drops in the nose.

Bharat Biotech has said its BBV154 vaccine is proven to be safe and generated an immune response in clinical trials on about 4,000 volunteers.

Mucosal vaccines target thin membranes that line the nose, mouth and lungs. They are administered by contact with linings of the body’s barrier organs through drops, sprays, or swallowed capsules. BBV154 is made from adenovirus, a relative in the family of cold viruses that expresses the spike protein found in SARS-CoV-2, which the virus uses to enter and infect the cells.

“There are two advantages of intranasal vaccines over intramuscular (or subcutaneous) vaccines,” said immunologist. One thing is clear; they are easier to administer, since they do not need to be injected. The second one, which is being widely discussed, is more hypothetical — they are thought to provide better immediate local protection in the lining of nose, throat and large lung airways,” Satyajit Rath, also from IISER, told PTI.

While there is some evidence, mostly from polio vaccines, for this advantage of the mucosal vaccines, it is not yet clear if they will live up to this in actual usage in people, he explained.

Ms. Bal added that the ease-of-use of the intranasal vaccine makes it easier to administer on a mass scale.

Oral polio vaccine is the case in point. Only because needle syringes are avoided, the fear in people’s mind also can be less. However, how uniformly the predetermined volume of the vaccine can be given and whether optimal amount of virus will trigger immune response are some of the variables to be kept in mind,” Ms. Bal told PTI.

Another plus point for a nasal vaccine is the cost factor. Though the pricing for Bharat Biotech’s intranasal vaccine is still unclear, it will be considerably cheaper than the injectable ones.

The nasal delivery system was designed and developed to be cost-effective, a feature that is especially important in low- and middle-income countries, and the vaccine can be stored in a refrigerator, scientists said.

Receiving the vaccine requires only a brief inhalation, a major advantage for the many people who prefer to avoid needles, according to researchers at the Washington University, which developed the vaccine technology on which BBV154 is based.

Importantly, they said, the design of the vaccine makes it relatively quick and easy to update when new variants emerge — simply by switching out the current spike protein with one from a new variant.
In a study published in July, the researchers also noted that intranasal vaccines for COVID-19 will be critical to protect people against the emerging variants of concern.

The nasal vaccine provides a mucosal antigen boost to the pre-existing immune cells that direct immune response, resulting in higher immunity, they explained.

Mr. Rath cautioned that the possible emergence of yet another virus variant that can efficiently avoid the current immune responses could well change everything.

There is yet no evidence indicating that such mucosal vaccines will have any unique utility specifically against new SARS-CoV-2 variants, he said.

However, Rath noted that if such vaccines reduce infection, rather than reducing illness severity, they will be helpful in maintaining control over rates of virus transmission. Four mucosal vaccines for COVID-19 in the world have been approved so far, including one each in Iran and Russia, according to Airfinity, a London-based health-analytics company.

Over 100 mucosal vaccines against the disease are in development worldwide, and about 20 have reached human clinical trials, it said. In principle, according to Bal, highly immunogenic nasal vaccines can significantly decrease the efficacy of transmission.

Our reluctance to use masks can be partly compensated by a very effective nasal vaccine. Based on the data… if this is really the case, then nasal vaccines would be useful as boosters as well, Ms. Bal said.

She said India’s nasal vaccine has been given permission as a primary vaccine and not as a booster. That means its utility with the present approval is very very limited in India.

However, globally, especially in many other lower and middle income countries (LMICs) there is still very poor vaccine coverage and this vaccine might find a place in such countries, Ms. Bal added.

India logged 4,369 new coronavirus infections, according to the Union Health Ministry on Tuesday, the lowest in over three months. However, the threat of another variant is ever present.

Another New COVID Variant Is Spreading – Here’s What We Know About Omicron BA.4.6