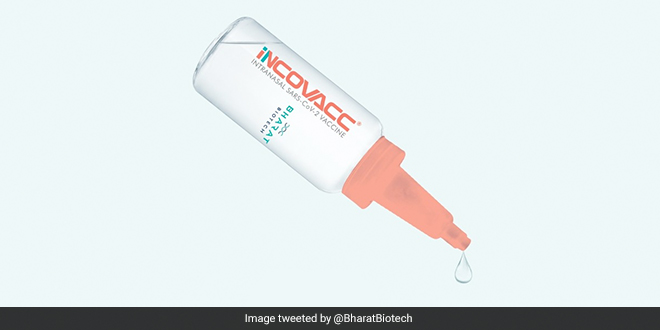 iNCOVACC was evaluated in phase I, II and III clinical trials with successful results

In a statement, the Hyderabad-based firm said its iNCOVACC (BBV154), the world’s first intranasal COVID-19 vaccine, received approval from DCGI under restricted use in emergency situation for ages 18 and above.

Mr Mandaviya said this step will further strengthen “our collective fight” against the pandemic. India has harnessed its science, research and development (R&D), and human resources in the fight against COVID-19 under Prime Minister Narendra Modi’s leadership, he said.

With the science-driven approach & Sabka Prayas, we will defeat COVID-19

iNCOVACC is a recombinant replication deficient adenovirus vectored vaccine with a pre-fusion stabilised spike protein. This vaccine candidate was evaluated in phase I, II and III clinical trials with successful results, the press release from the vaccine-maker said.

Clinical trials were conducted to evaluate iNCOVACC as a primary dose schedule, as heterologous booster dose for subjects who have previously received two doses of the two commonly administered Covid vaccines in India.

We are proud to announce the approval of iNCOVACC, a global game changer in intranasal vaccines technology and delivery systems. Despite the lack of demand for COVID-19 vaccines, we continued product development in intra-nasal vaccines to ensure that we are well prepared with platform technologies for future infectious diseases

Phase III trials of the vaccine were conducted for safety, immunogenicity in about 3,100 subjects, in 14 trial sites across India, Bharat Biotech said.

BBV154 has been specifically formulated to allow intranasal delivery. In addition, the nasal delivery system has been designed and developed to be cost-effective in low and middle-income countries.

This trial has been permitted to be conducted at nine sites.

Barely Any Difference In PM2.5 Trends Among Cities Covered In National Clean Air Programme And Those Outside It: Report