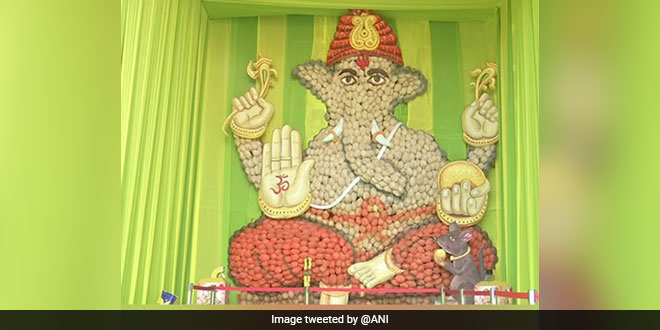 In Hyderabad, the Ganesh pandal was exquisitely decked with various themes keeping sustainability as primary objective

Hyderabad: As part of the Ganesh Chaturthi celebrations, an eco-friendly Ganesh idol is made using 17,000 coconuts, becoming a source of attraction, for people in Hyderabad. Speaking to ANI, Kumar, an Organiser said in Hyderabad city, the Ganesh pandal is exquisitely decked with various themes. An artist from Kerala travelled all the way to Hyderabad to adorn a Ganesh pandal made of coconuts.

Ganesha which is built of coconut is really attacking the people of Hyderabad. I suggest everyone refrain from buying PoP idols. To have a safe environment around us, it is important for all of us to follow purchasing eco-friendly idols, Mr Kumar said.

“Different emotions are associated with the coconut among people. Coconuts are used on several occasions. In light of that, we made the Lord Ganesha idol with coconuts. We made this Ganesha using 17,000 coconuts and it took 8 days to complete this,” he said.

Every year, Murali Anna from our neighbourhood erects the Ganesh pandals. He has been performing this for a while. We created a coconut-based Ganesha this year that is eco-friendly. We always place eco-friendly Ganesh idol here. A number of visitors from various regions of the city visit here to see this.

Another devotee, Rajeshwar, advised people not to purchase Plaster of Paris idols, adding that it was crucial for everyone to utilize eco-friendly idols in order to protect the environment. Mr. Rajeshwar said,

To save our country, we need to be part of the eco-friendly celebrations. I would suggest all people not to buy PoP idols.