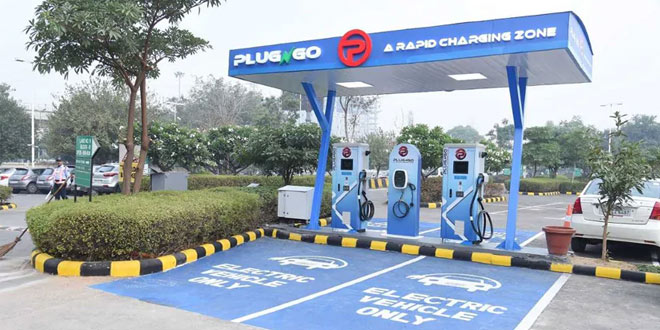 New Delhi: Indian Government has decided to build one charging station for electric vehicles (EVs) on inter-city connecting roads and highways at every 25 Km and one fast charging station at every 100Km on highways for heavy-duty vehicles by 2030. This decision was made by the Ministry of Housing and Urban Affairs (MoHUA) as a move to promote electric mobility in the country. The Ministry has also made building charging infrastructure mandatory in the residential and commercial buildings in cities.

To implement this decision, the ministry has made amendments in two laws being implemented under it- Model Building Bye-laws (MBBL), 2016 and Urban Regional Development Plans Formulation and Implementation (URDPFI) Guidelines, 2014, by including provisions for establishing electric vehicles (EVs) charging infrastructure. These two laws did not have building charging infrastructure for EVs in their mandate earlier. With these amendments, the State Governments and Union Territories will be required to make changes in their respective building and urban planning laws to provide for building charging infrastructure for EVs on the inter-city connecting roads, highways and residential areas.

The amendments in MBBL call for strengthening the intra-city charging infrastructure, by making installing chargers for individuals at residential and other buildings. MoHUA also directs for implementation of Ministry of Power’s recommendations which targets at least one charging stations set up at every 3Km square area in cities. Along with this, MoUHA said that at least 20 per cent of the total vehicles parking capacity of these building will be reserved for EVs.

According to the amendments made in URDPFI, one charging station will be installed on both sides of highways and inter-city connecting roads on every 25 km and one fast charger for long-range and heavy-duty EVs will be installed at each side of highways every 100 km. This amendment would benefit the long distance and/ or heavy-duty EVs like cars, buses, and trucks traveling from one city to another. The amendments also call for building battery swapping stations so that EVs, especially commercial ones can quickly exchange the discharged battery for a fully-charged one without having to wait for hours.

Durga Shankar Mishra, Secretary, Ministry of Housing & Urban Affair through his twitter handle said, “A positive step towards creating a cleaner and greener world for the generations which will inherit it from us.”

A positive step towards creating a cleaner & greener world for the generations which will inherit it from us. pic.twitter.com/832iHu4WEL

According to Sohinder Gill, CEO of Hero Electric and Chairman of Society of Manufacturers of Electric Vehicles (SMEV), while the amendments are welcoming, there are certain issues that need to be resolved as far as setting up of charging stations at every 25 Km is concerned. He said,

Setting up of charging stations alone will not be helpful. There needs to be some place like a coffee place or a restaurant along with every charger to be set up on highways and inter-city connecting roads, where the EV driver and people travelling in the vehicle can pass time when the vehicle is getting charged. Even the fastest EV charging technology available today in India would need at least half-hour to 90 minutes of charging time.

For intra-city travel, Mr. Gill says that the government’s plan is welcoming and if implemented effectively will give a boost to electric vehicles for local commute and will give confidence to the consumers.

Earlier, in December 2018, the government undertook initiatives for encouraging the easy and smooth building of charging infrastructure in the country. This includes allowing setting-up of charging stations, both private and public, without requiring a license which means that any individual or entity is free to set up charging stations provided that the stations meet all technical standards and protocols laid down by the Ministry of Power. The government has also started giving green number plates to the electric vehicles to make them stand out from other vehicles. These initiatives are in line with central governments mission to have 30 per cent of total vehicles on road as electric by 2030.