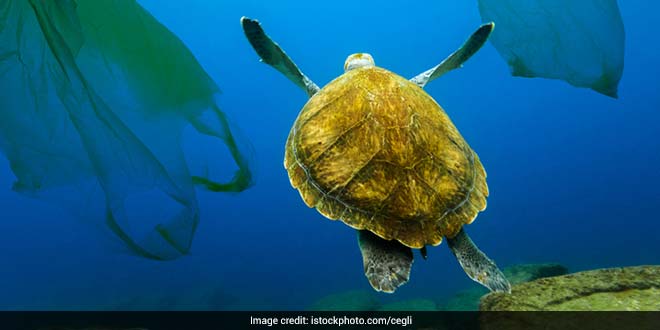 New Delhi: Plastic is a ticking time bomb. It is a threat to the earth’s largest living space, oceans. Marine litter is the fastest growing environmental concern and when it comes to India, the country dumps about 600,000 tonnes of plastic waste into the oceans annually. With a coastline of 7,500 kms, India faces a huge challenge in cleaning up its seas and meeting its commitment to eliminate single-use plastic in the country by 2022.

To help take on this mammoth mission to fight marine litter, India has recently announced two collaborations with Norway and Germany.

Collaboration Between India And Germany

Under the chairmanship of Minister of Environment, Forest and Climate Change, Dr. Harsh Vardhan and his German counterpart Federal Environment Minister Svenja Schulze, the Third Indo-German Environment Forum was held in New Delhi on February 13. The theme and the title for the forum was “Cleaner Air, Greener Economy: Capacities and Technologies for Implementing NDCs and SDGs”.

The one-day event through panel discussions and parallel sessions focused on challenges, solutions and necessary framework conditions of air and marine pollution control, waste management and circular economy as well as implementation of NDCs and SDGs based on Paris Agreement and Agenda 2030 of UN respectively.

The Union Minister said that India’s development trajectory focusses on five Ps — People, Planet, Prosperity, Peace, and Partnership. During the event, the Federal Environment Minister from Germany, Svenja Schulze, said progress and implementation of Agenda 2030 were slow and the window of opportunity for a low-carbon economy was dwindling. She said,

A lot has been achieved in recent years but the global carbon emission is still rising. The 2030 Agenda of the UN needs to be taken seriously by the government. The forum needs to build on experience exchange and cooperation will be strengthened in the areas of marine litter, waste to energy, biodiversity, waste, and water.

Translated: “Good morning from New Delhi. There I met my counterpart @drharshvardhan to agree closer cooperation between Germany and India on climate protection and the prevention of marine litter,” tweeted Ms. Schulze.

Collaboration Between India And Norway

India and Norway, signed a Memorandum of Understanding (MoU) to work closely on oceans maintenance thus establishing the India-Norway Ocean Dialogue during the Norway Prime Minister,  Erna Solberg’s visit to India last month.. As part of the dialogue, India inked a letter of intent with the Norwegian Ministry Of Foreign Affairs to begin the joint partnership of the India-Norway Marine Pollution Initiative.

Under the initiative, a joint task force on ‘Blue Economy’, a concept relating to the exploitation and preservation of the marine environment, has been formed. This task force known as, Joint Task Force (JTF), includes government officials, researchers and experts as well as the private sector. MoU will promote cooperation in the areas of mutual interest pertaining to the development of blue economy. A statement released by the Press Information Bureau explained,

Norway is a global leader in the area of Blue Economy and has cutting-edge technologies and expertise in areas such as fisheries, hydrocarbons, renewable energy, sustainable harnessing of ocean resources and maritime transport. The proposed MoU will contribute to create opportunities for collaboration in areas such as exploitation of hydrocarbons and other marine resources, as well as management of ports and tourism development for the mutual benefit of all stakeholders within the framework of the JTF.

The collaboration will also contribute to the objective of Food Security through infusion of new technologies in fisheries and aquaculture. It will further offer a platform for businesses in both countries to execute profitable ventures. As part of the partnership, scientists and researchers are to collaborate on studying ocean ecosystem also in the context of the Arctic region.

The initiative also mentions about the support that will be extended towards beach clean-up efforts, awareness raising campaigns and pilot project using plastic waste as fuel substitution for coal in cement production and developing frameworks for deposit schemes. Nils Ragnar Kamsvag, Ambassador to India, Embassy of Norway who signed the joint initiative formally with the Additional Secretary, MoEF&CC, Anil Kumar Jain, said,

We are seeking support by local governments in implementing sustainable waste management practices and the task force will be responsible for developing systems for collecting and analysing information about sources and scope of marine pollution and improve private sector investment.

The Issue Of Marine Pollution

The three major water bodies of India, the Bay of Bengal, the Arabian Sea, and the Indian Oceans are overflowing with man-made pollutants that include pesticides, herbiscides,chemical fertilizers, detergents, oil, sewage, plastic, among others.Reports show that 80 per cent of the ocean’s pollution is plastic, which results in the deaths of thousands of ocean-inhabitants every year.

According to the report ‘Pollution of the seas around India’ by the authors S Z Qasim, from Department of Ocean Development, India and R Sen Gupta and T W Kureishy from National Institute of Oceanography, 5-6 million tonnes of petroleum and oil have been discharged in the Indian Ocean, which is around 40 per cent of the total petroleum spill in the world’s waters.

The sea shores too are evidently polluted. Most of the main tourist beaches in India, like Baga Beach in Goa, Juhu beach in Mumbai and the infamous Versova beach among others, are littered with cigarette butts, plastic bags, straws and other harmful waste at the shoreline that ultimately lands up in the sea.

On the World Environment Day 2018, India joined United Nations Environment’s global ‘Clean Seas Campaign’ and the Union Ministry of Earth Sciences took on the comprehensive study to identify the source of marine litter, especially the plastic waste that flows into India’s coastal waters. This was the first step towards framing a ‘National Marine Litter Policy’ with the objective to clean up the oceans.

According to the officials of the Indian National Centre for Ocean Information Services, the researchers are developing a database on the origin, pathways and trends of marine debris across the country’s coastline. The official said,

This exercise will help identify the source of litter, especially the plastic waste, quantify and classify the pollution type and draw up a map on waste circulation in India’s coastal waters. To draw up an effective marine litter policy, it is highly important that we identify the different sources and types of marine pollution.

Experts have lauded India’s commitment to combat marine pollution with the recent initiatives asserting that the stress on encouraging research in reducing marine litter will be beneficial as it could pave the way for the development of new strategies that can efficiently address the problem of marine pollution.

Electric Vehicles: Government To Setup Charging Stations At Every 25 Km By 2030