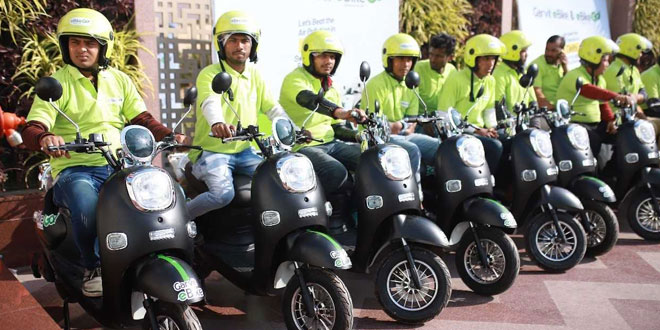 New Delhi: While Delhi is grappling with finding a way to curb air pollution and curtail vehicular emissions, E-bike, an Amritsar based startup is set to provide a cleaner solution for public transport. E-bike, which has been operating in Amritsar since 2018 and has become quite popular among the residents, is soon launching electric scooters on three platforms- rentals, bike-taxis, and delivery services in Delhi. According to Hari Kiran, Project Head of Ebike, the startup aims to provide an eco-friendly way of transportation which will also make travel cheaper, efficient and fast-paced for people.

Talking about the inception of E-Bike, Dr. Irfan Khan, the founder of E-Bike said,

When I was running a couple of outlets in Dalhousie where I live, I started an NGO named Swachh Dalhousie in 2014 to clean the city as there was so much of trash all over the place, as it is a tourist place. So, as part of this NGO, we organised many campaigns and we were successful as many students, employees supported this cause. Seeing that, I thought of doing something similar as well pan India and finally eBike came into the picture in 2018.

E-Bike started its research and development on electric mobility services in 2017 and started its operation in 2018 in Amritsar. Along with Delhi, E-Bike will soon launch the electric scooter services on the all three platforms in Jaipur, Jalandhar, and Lucknow.

In Delhi, the scooter rental services was launched on February 10 and can be availed on the website and Android & iOS application of Wheelstreet, an online two-wheeler rental company. In the rental model, a person can rent the electric scooter for an hour or a day or even for a month, depending on the need of the user. Charges for renting will on hourly basis- for half an hour it is Rs. 20, for one hour it is Rs. 30, for one day it is Rs. 300 and Rs. 6000 for one month.

The electric scooter taxis will be launched in Delhi by the end of February which can be booked using a mobile application which is undergoing tests. In Amritsar, however, these scooter taxis are currently running in a traditional way where the user needs to call a designated number. The charges of the scooter taxi are Rs. 10 for the first three km adding Rs. 3 after that per km.

Bikes used by food delivery operators add considerably to pollution levels and if we can replace these with e-bikes, it will make a significant difference.

E-bike is using Okinawa’s ‘Ridge plus’ scooters for its services which are powered by a detachable lithium-ion battery. A charger will be given to the user with which the scooter can be charged like charging a phone or a laptop.  On one charge of two hours, the user can travel up to a distance of 180 kilo metre with a maximum speed of 75 km/hr.

For its scooter-taxi and delivery service, the startup is also installing charging points at prominent places like malls, public parking lots and food delivery joints where the company has provided scooters. According to MR. Kiran, while the startup is currently dependent on the electricity provided by the local DISCOMS (electricity distribution companies), it is working on tapping into renewable sources like solar energy for the charging points.

Sharing its, future plan, Dr. Khan said that startup aims to expand its services in the electric vehicle sector to provide cleaner alternatives. According to Mr. Khan,

E-Bike is a very strong and thoughtful concept which shall easily reach out to people across ages, cultures and regions to eventually remove the usage of petrol/diesel vehicles. Recognizing the benefits of electric vehicles we foresee a need to expand ourselves to the various parts of India and provide various facilities like ecargos, ecabs, commercial vehicles etc. Our expansion shall be synonymous to National Development and eBike shall become the heart of Smart India.

According to a survey by the Society of Indian Automobile Manufacturers (SIAM), in 2016 India overtook China and emerged as the world’s biggest market for two-wheelers. This, according to experts is also one of the reasons for the rise in pollution levels in numerous cities in India. Alternatives like e-bike can provide an eco-friendly alternative, especially for inter-city commuters.

Also Read:  One-Fourth Of The Vehicles To Be Electric In Delhi By 2023, Government Sets Target To Combat Air Pollution